I returned to England in the August of 1945 and was out of the Army by Christmas – back in civvy street. It had been arranged for more than a year that I would take over the management of a small village cinema in Nottinghamshire. The first Monday in January 1946 I did just that. Transport of any kind was at a premium. My brother-in-law again came to rescue. He knew someone in Farnsfield who had an old Morris they wished to get rid of. Two old ladies owned a very old Morris Minor two-seater car. It was decrepit; a write-off. On learning I had been in the forces for six years the old lady and her daughter wished to give me the wreck. What could I do?

I realised it would be too much for me to tackle and get it on the road. It seemed they thought I didn’t want to pay money for it – which was true – I had the sense to know it would cost me too much in time and money to get it working satisfactorily. They literally made me take it! We towed it home. At first it seemed four wheels and a body with a dud engine was better than nothing. I’d have a go at getting it going or it would be shank’s pony, or trying to catch a ‘bus. I tried hard. Not being a motor mechanic, I let a couple of local chaps have a go at it. They had just started up a garage workshop. They did no better than I had but presented me with a bill for about twenty quid.

By this time, for it was now April I had the chance of buying a Singer “Le Mans” sports coupe. I let the Morris go in lieu of the repair bill, happy to see the back of it. I had to pay two hundred pounds for the Singer, an outrageous price, but one either parted with the precious money that represented much of my savings for six years or someone in queue bought it. It was a pretty car. It looked the part. I tried to make it perform according to its looks; it was a tall order as it had long ago passed its prime.

When the clutch eventually wore out I tried to get one from Singer works at Coventry. I phoned several times but got no sensible reply. On my trips into Nottingham to get my wheels re-spoked I had visited a breakers yard. I went there and my luck was in. I had to part with five pounds to get an old rusty clutch plate to clean up and put in new fibre pads. At least it worked; the one we took off was worn down to paper-thin metal. My friendly garage man was amazed it had kept working for so long.It appeared to be mostly engine and bonnet, the driver and passenger accommodation was set back just inside the rear wheels. It had a strong chassis mounted on once sturdy wire wheels, which I had rebuilt one wheel at a time. The engine although many miles old gave a fair performance. The clutch was “dicky” and was to cause me trouble getting it repaired. With a body made of aluminium there was not a speck of rust anywhere. The paintwork was in reasonable shape too. The gleaming chromium radiator grill with its snazzy heavy chromed stone guard grid look-good with the newly spoked wheels with large knock on type hubcaps. The low bodyline and the abrupt ending of the car, which seated only two people, was balanced by the spare wheel fastened to the back.

The winter of 1946 was the worst in living memory. In the Midlands for ten weeks the snow lay compacted on the ground. The roads were many inches deep in layer upon layer of solid ice. The cinema was six miles from home. I drove gingerly twice a day and on one occasion I decided to go back for lunch. There is a long incline downhill into the next village and half way down I came upon a local lad who sometimes worked as relief operator, I slowed down to give him a lift. No sooner had my feet touched the brake pedal than the car span round three times coming to a halt with the back lodged deeply in a high hedge, pointing in the opposite direction, and the rear wheels firmly in a ditch. The coal merchant from the village, when alerted, made short work of getting the car back on to the road and I drove it steadily into town.

For three days I drove back and forth. The car was acting awkwardly. I checked the steering and found nothing worse than usual. Since I owned it the steering had always been sloppy. The Le Mans was pulling to the right all the time. The owner of the village garage took off the back wheels and revealed a half shaft in two pieces. The reason it had run for so long was that the shaft had not snapped in a clean break but had sheared at an angle leaving a key-like wedge which rotated the shaft, but only because I was driving with such immaculate care whilst the snow and ice was on the ground. I had visions of the car being a “write-off”. Where in blazes was I going to obtain a half shaft? I would have to scour the county and beyond. What a disaster. However, Stokes Castings, a local firm of repute cut an exact replica on a lathe from a magnificent piece of steel. It was perfect. And to my delight the bill was only £2. 17s. 6d. That’s real motoring.

In the late autumn of 1947 I motored down in the Le Mans to Haslemere. In the tiny space at the back of the seats were two cans of petrol hidden behind my suitcase. I had gone to spend a long weekend with my old C. R. E. Lieut. Colonel Douglas Kassell. He and his mother were living in a residential country house hotel. Yes, I know, in ’47 other ranks and senior officers were not supposed to mix. Which was not the case. Junior officers kept senior N. C. O’s and warrant officers at arm’s length, not so my senior officers. Ever since Persia, when Douglas Kassell was a Deputy Commander R. E. then with rank of Major we had great respect for each other. Douglas was much taken with the car and said, quite flatteringly, it compared favourably with his Lagonda, which drank so much petrol he couldn’t run it very far. We went out for short spins each day but petrol was still rationed and I had to resort to much guile to get the odd gallon here and there. Some of the letters between us are shown below.

During my visit I spoke of my future and said I missed the sun. Douglas suggested the Middle East, The Iraq Petroleum Company for instance. The following March I was on my way to Qatar, a place I had heard of, for one of our engineers had taken a small team down there and in ‘43 built a landing strip, apparently in the middle of nowhere. 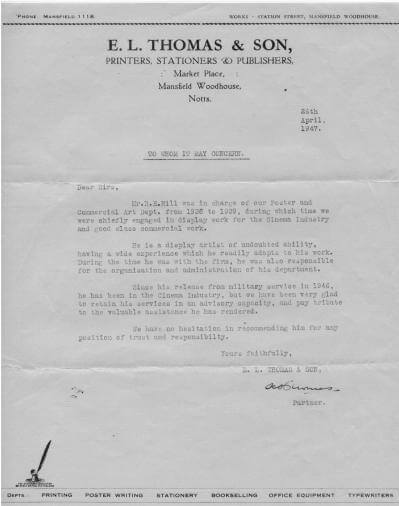 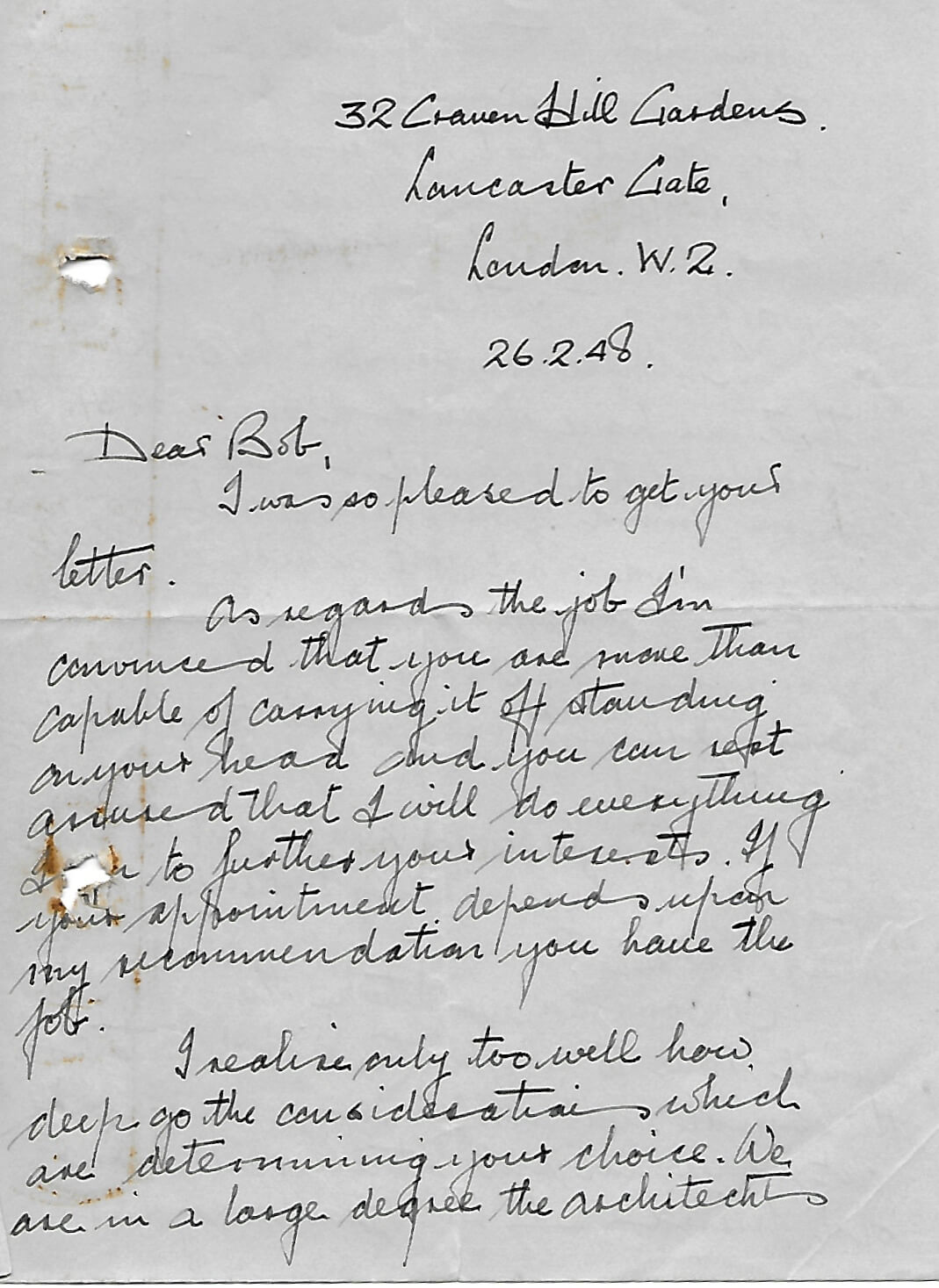 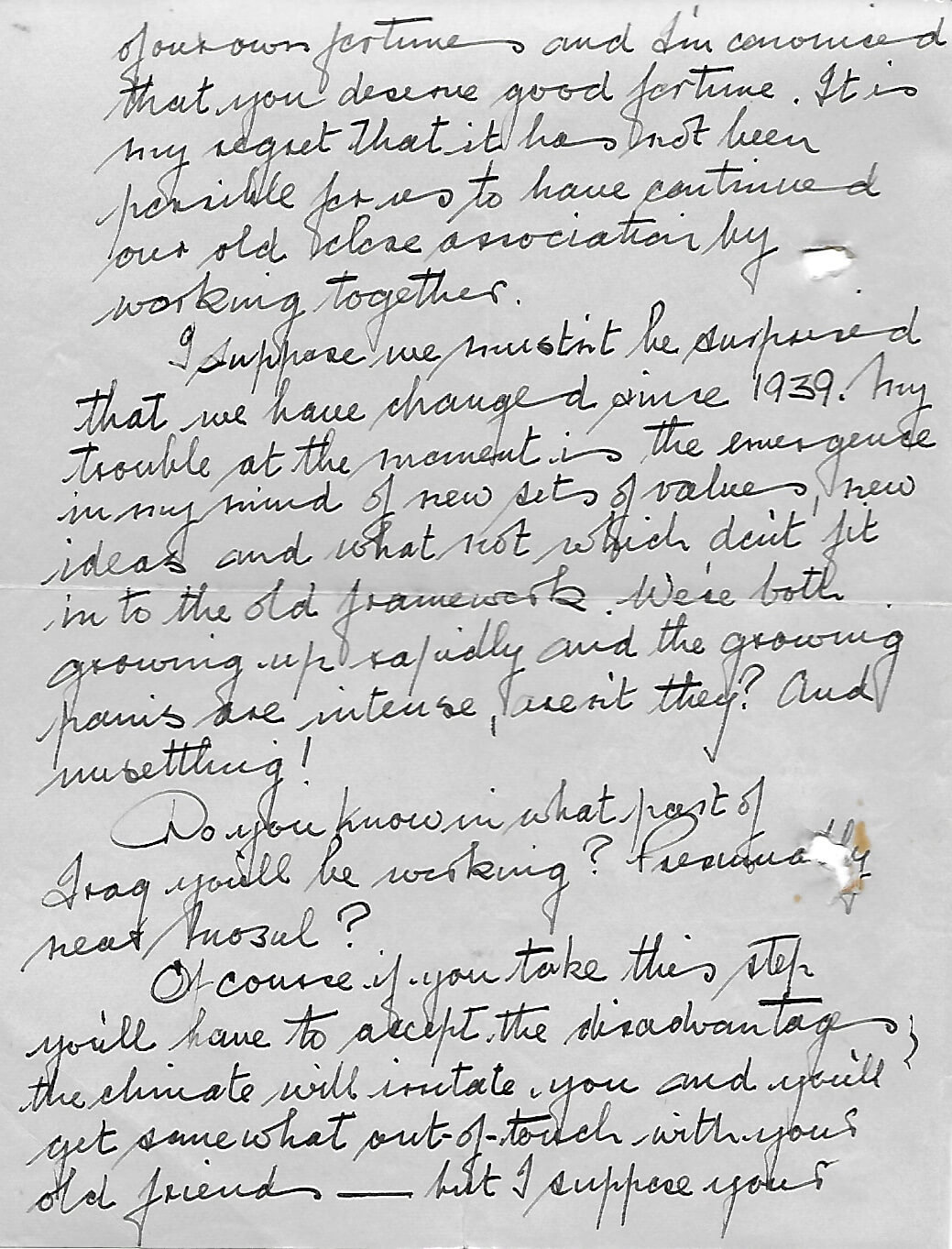 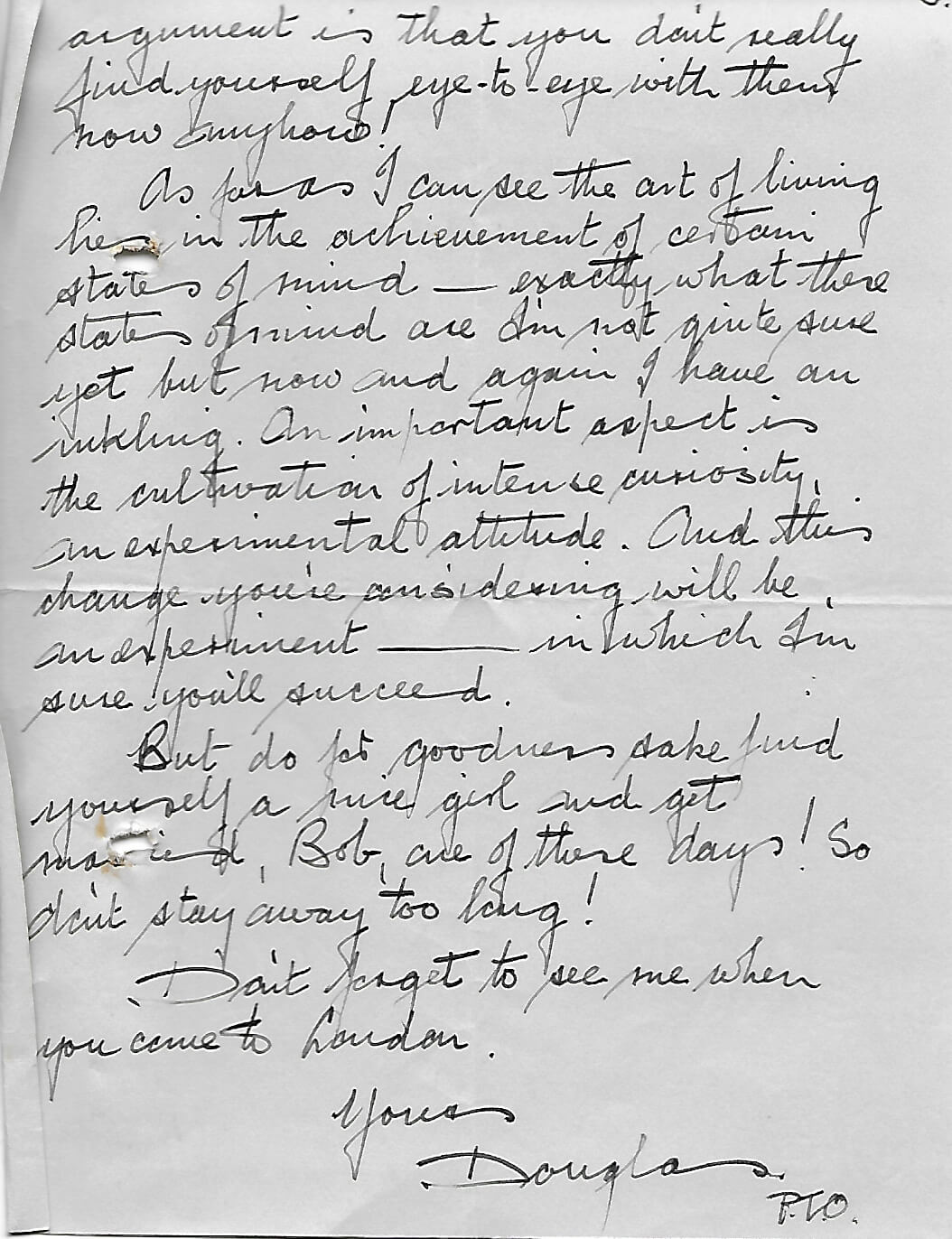 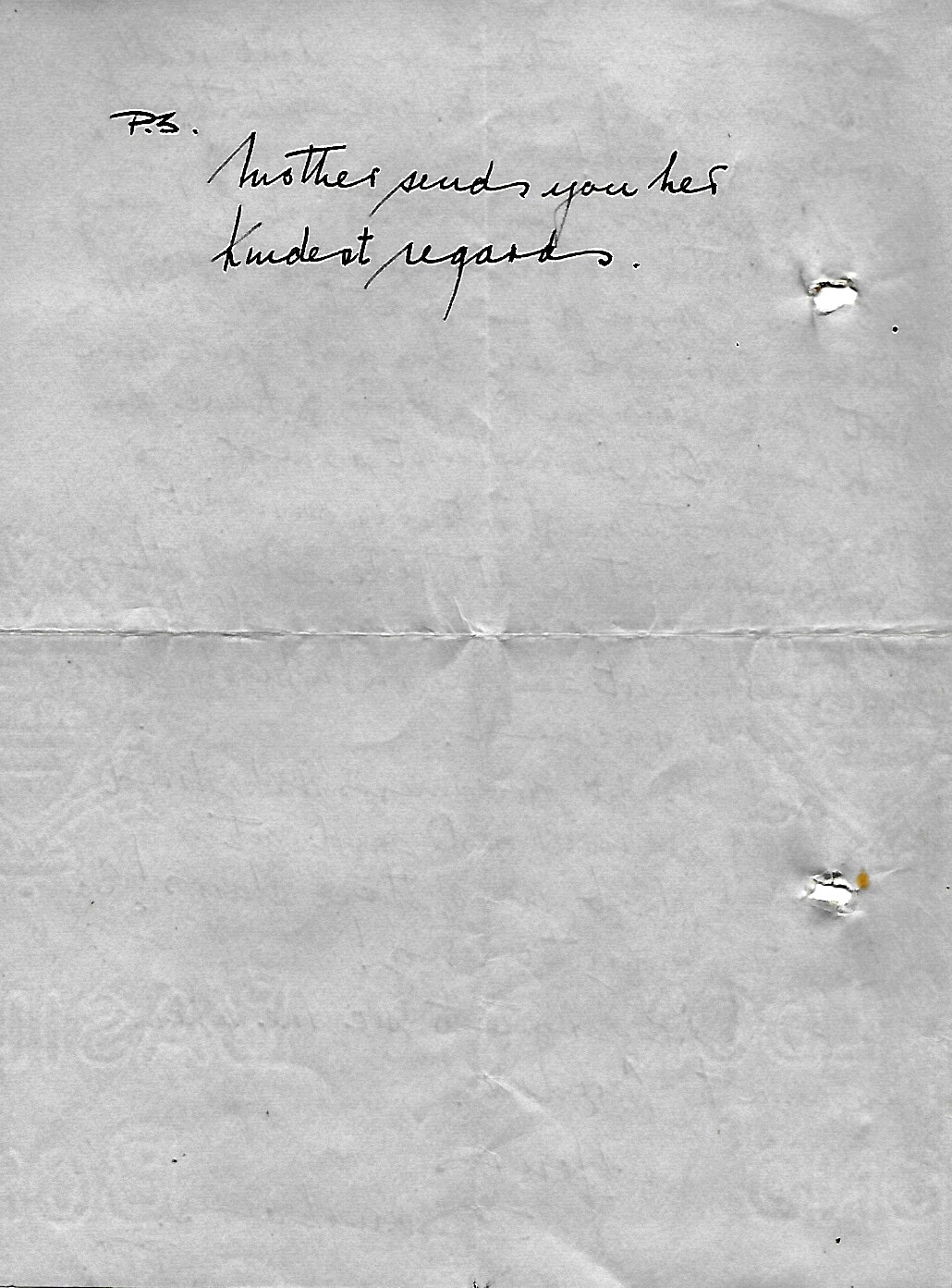 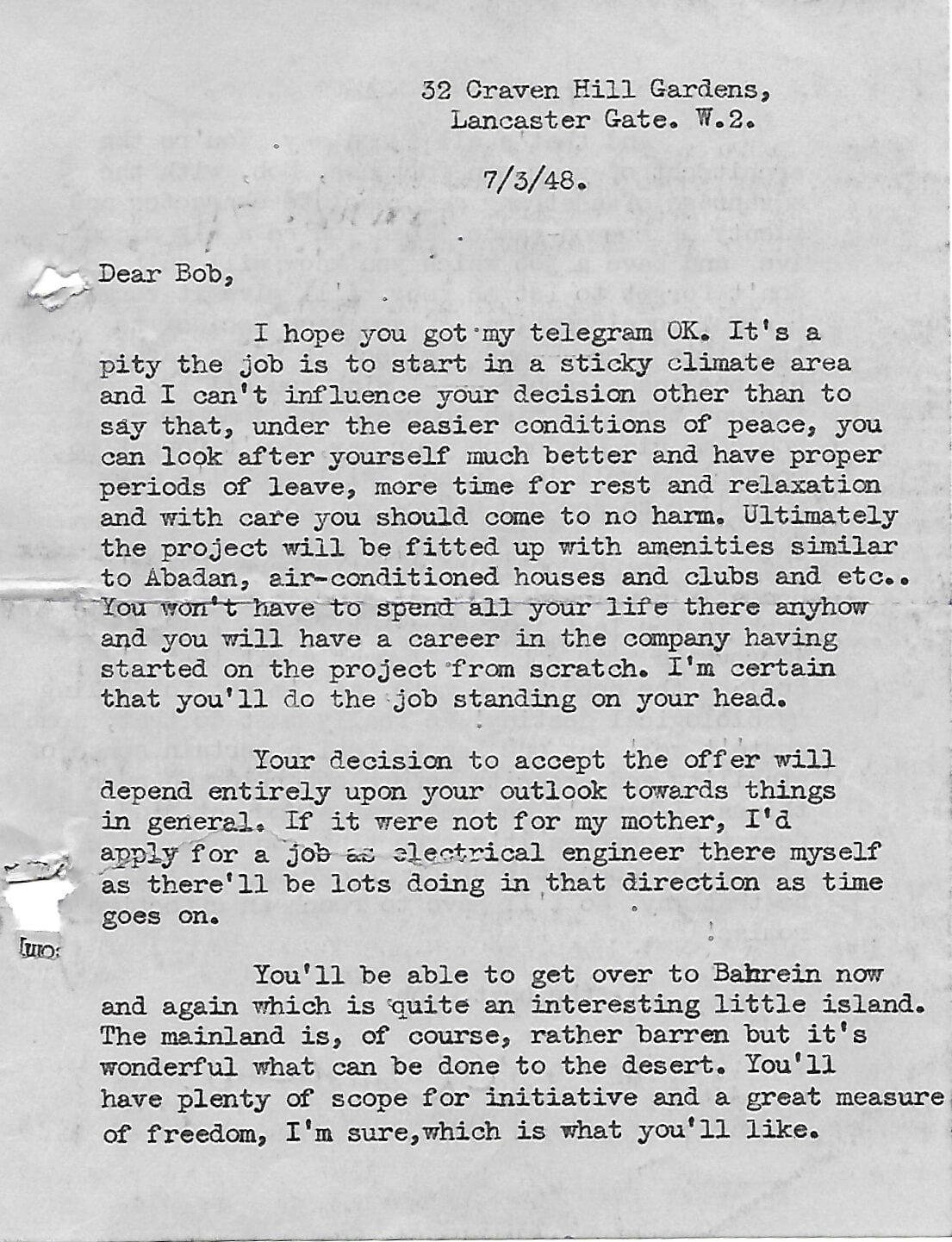 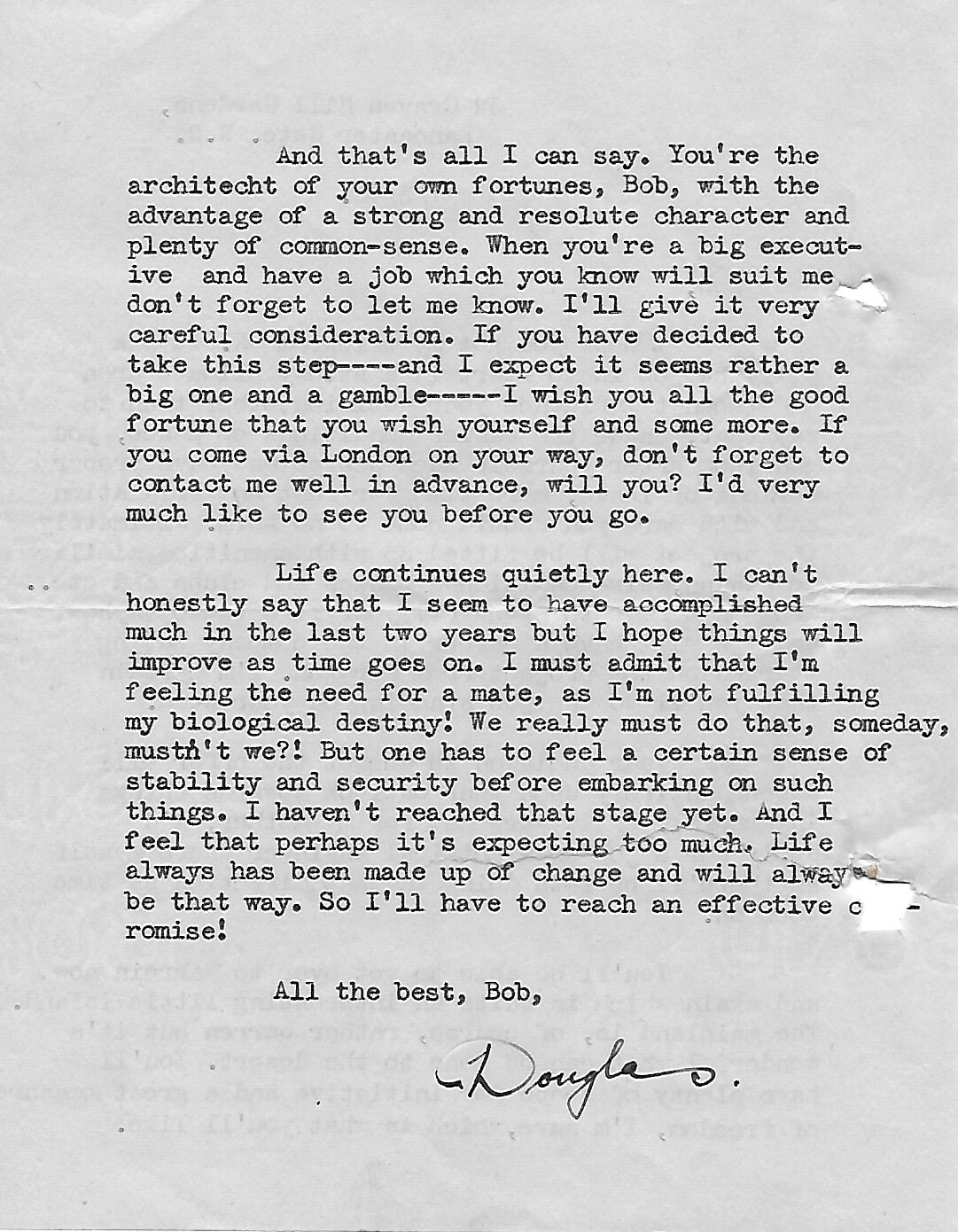 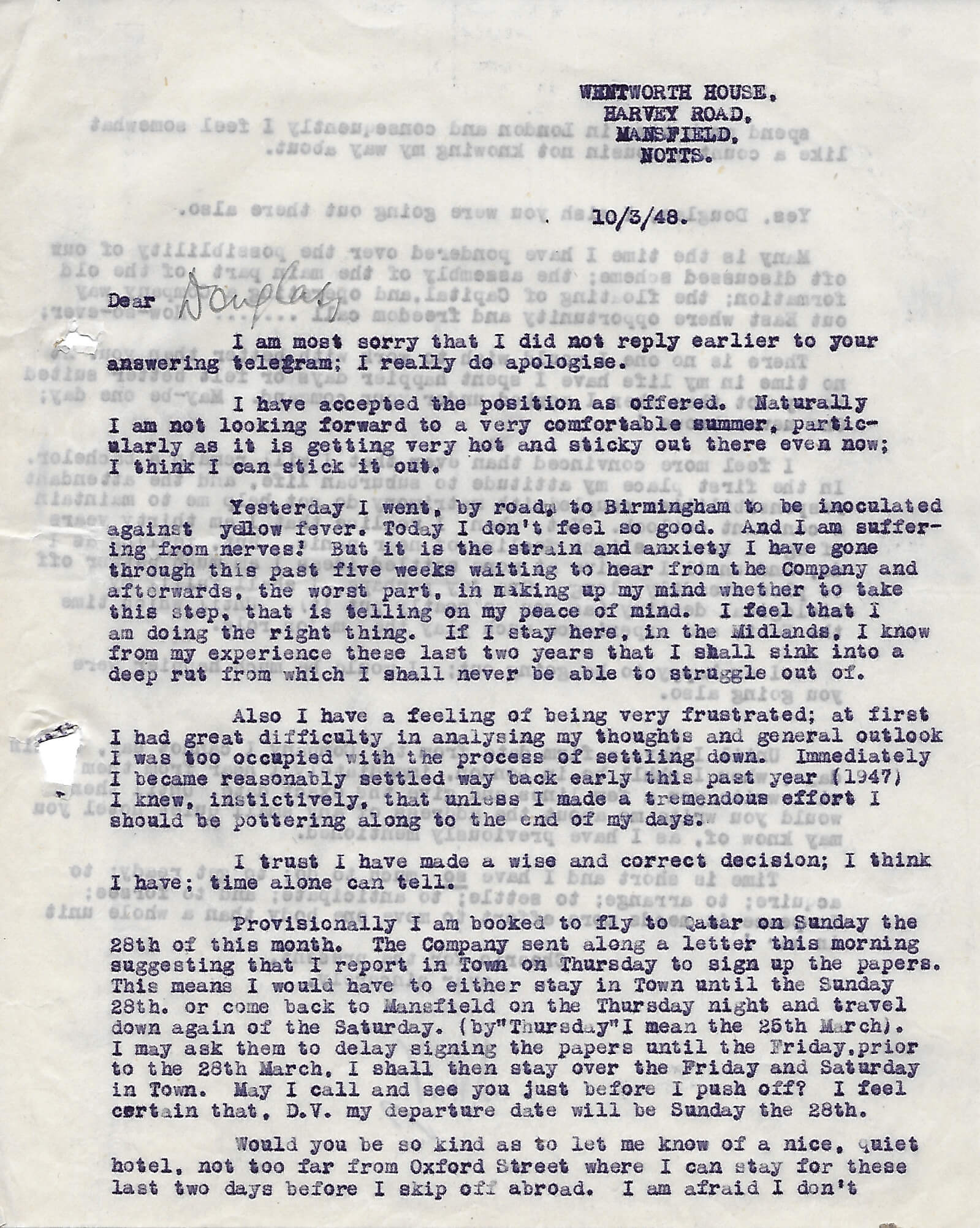 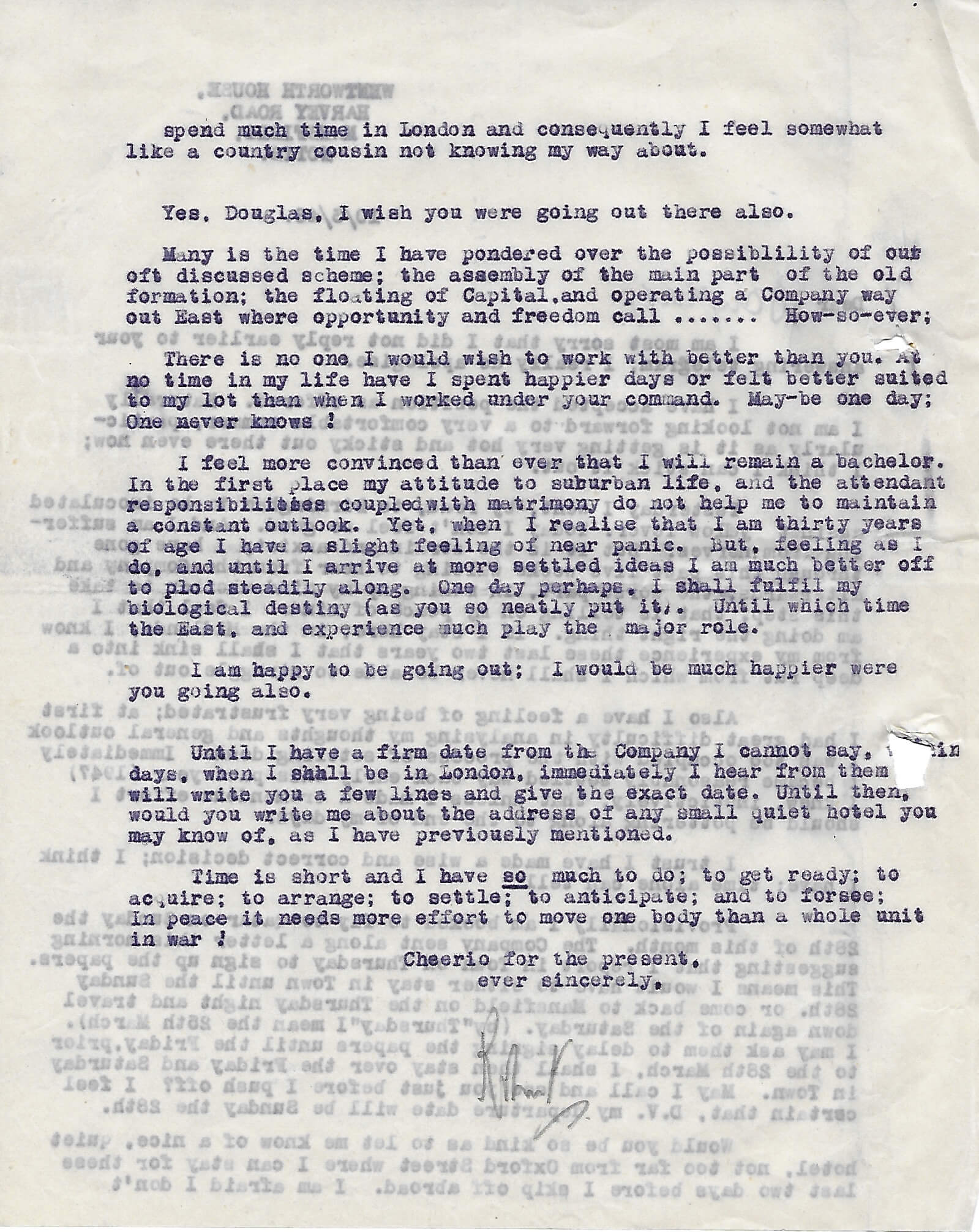 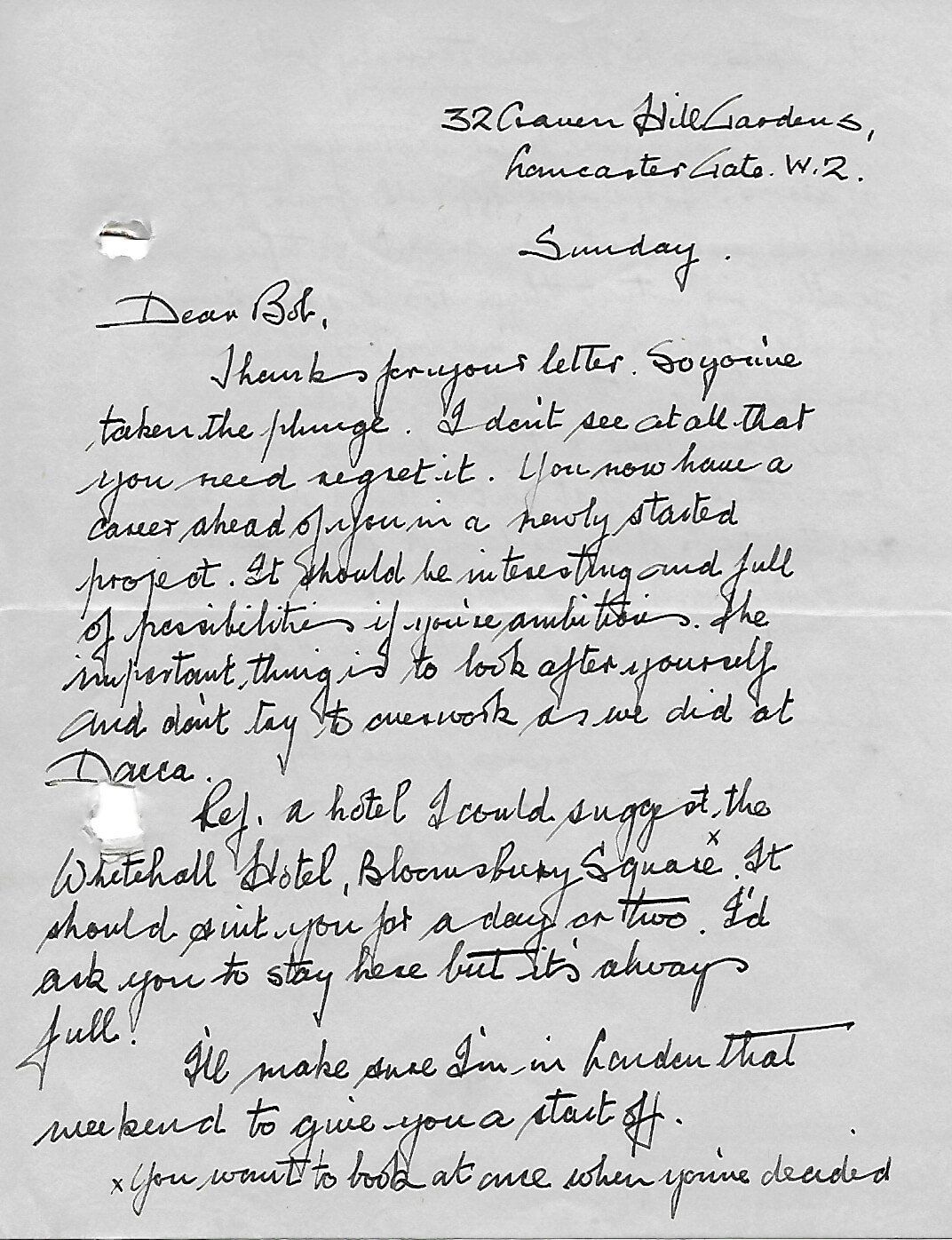 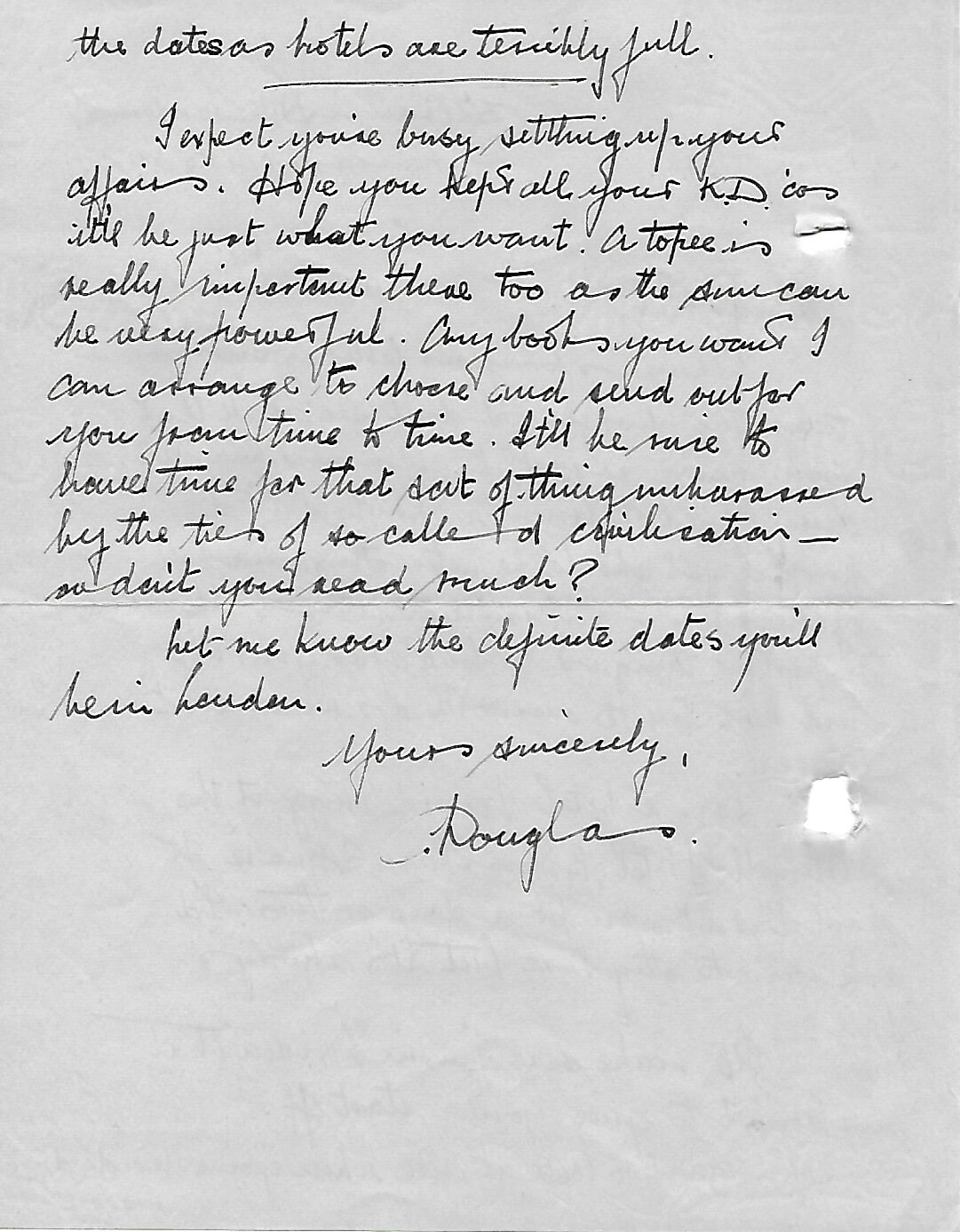 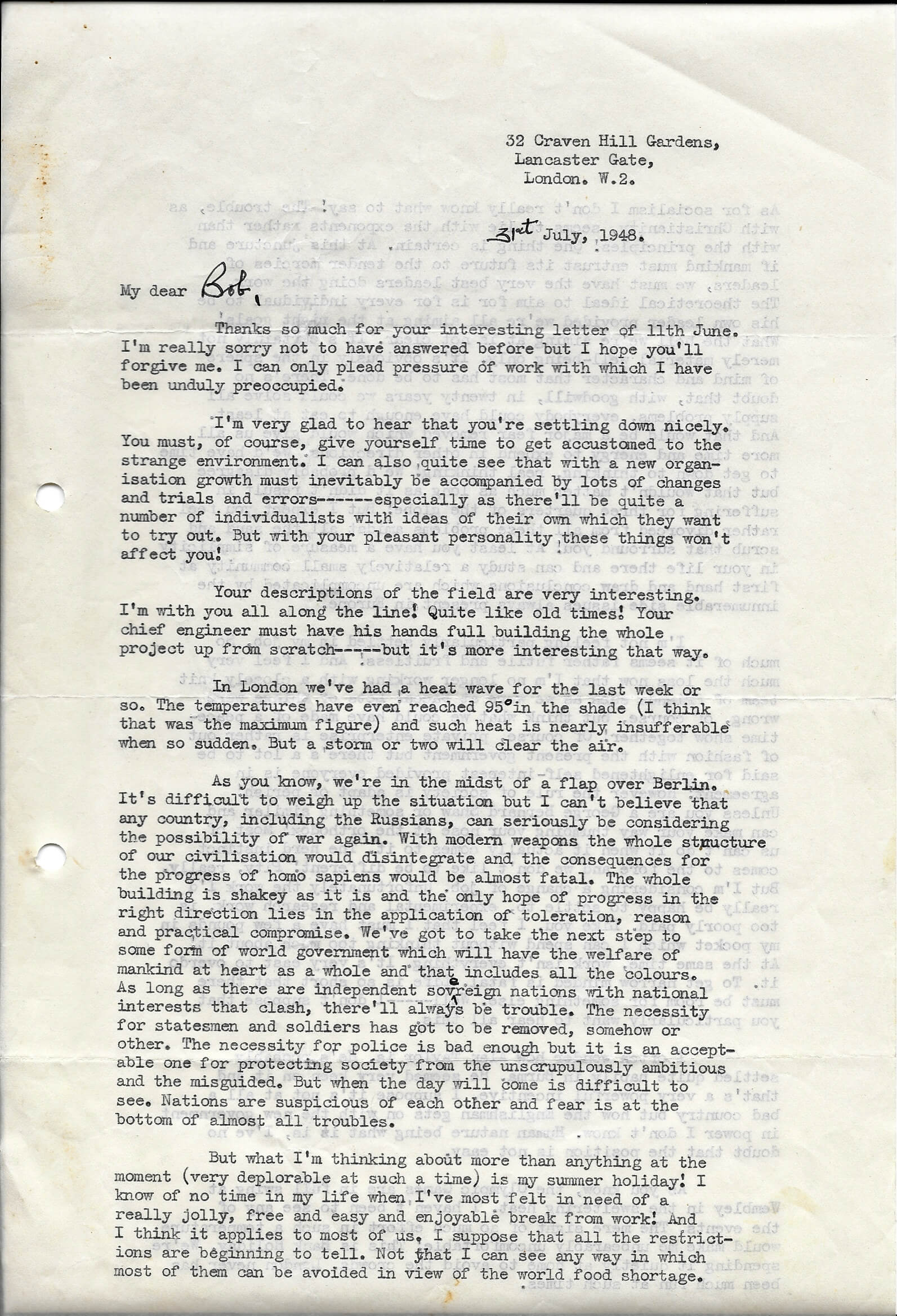 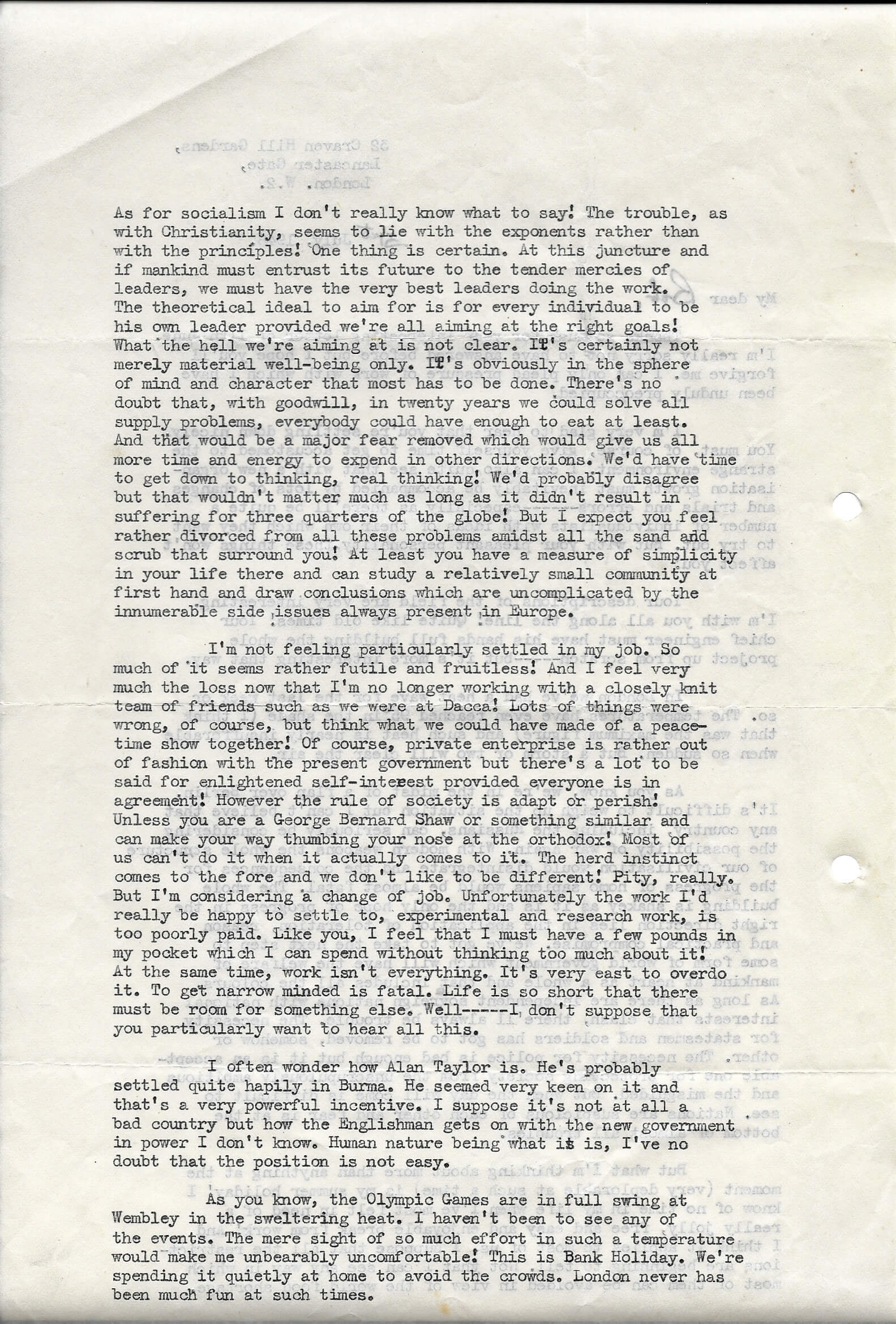 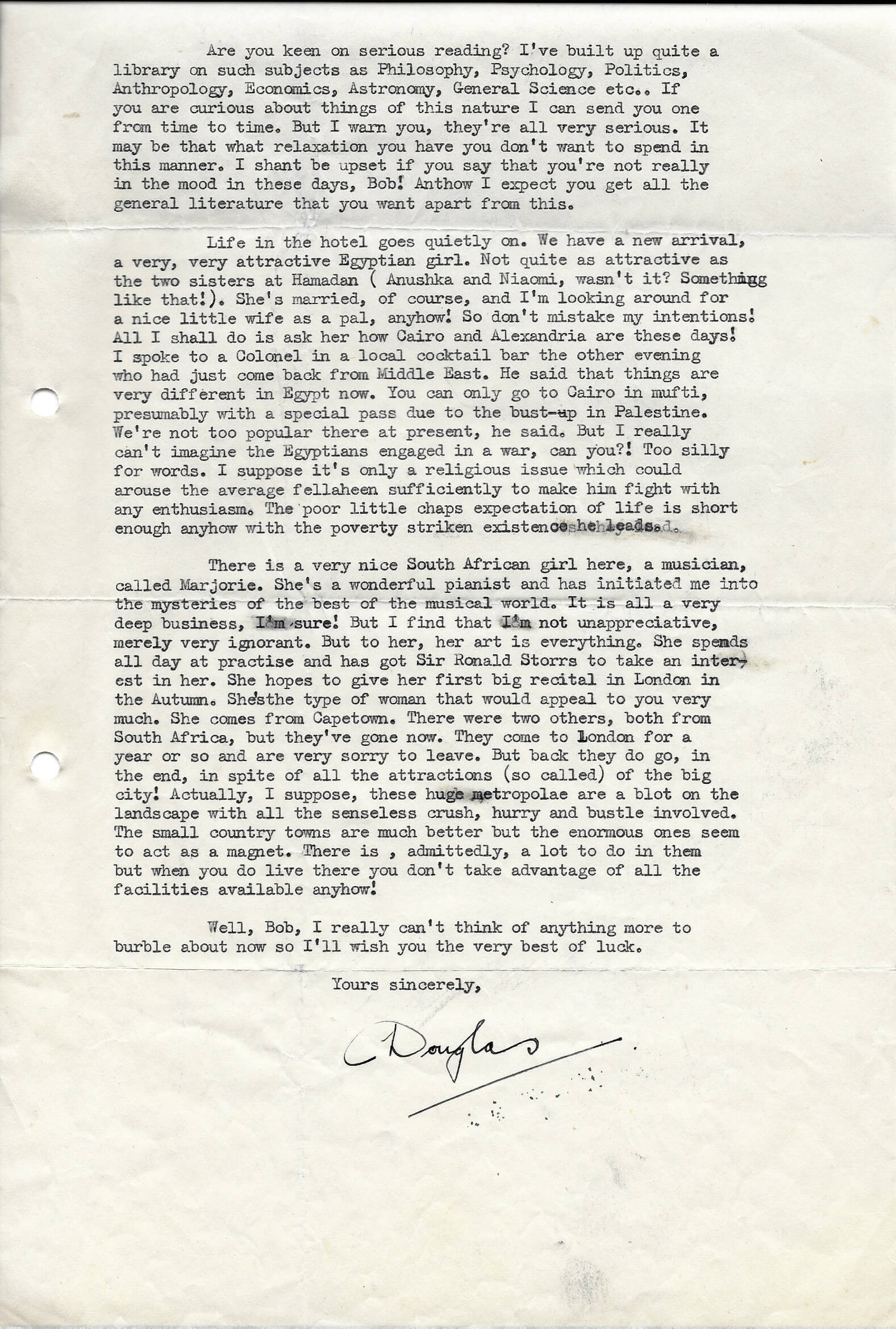 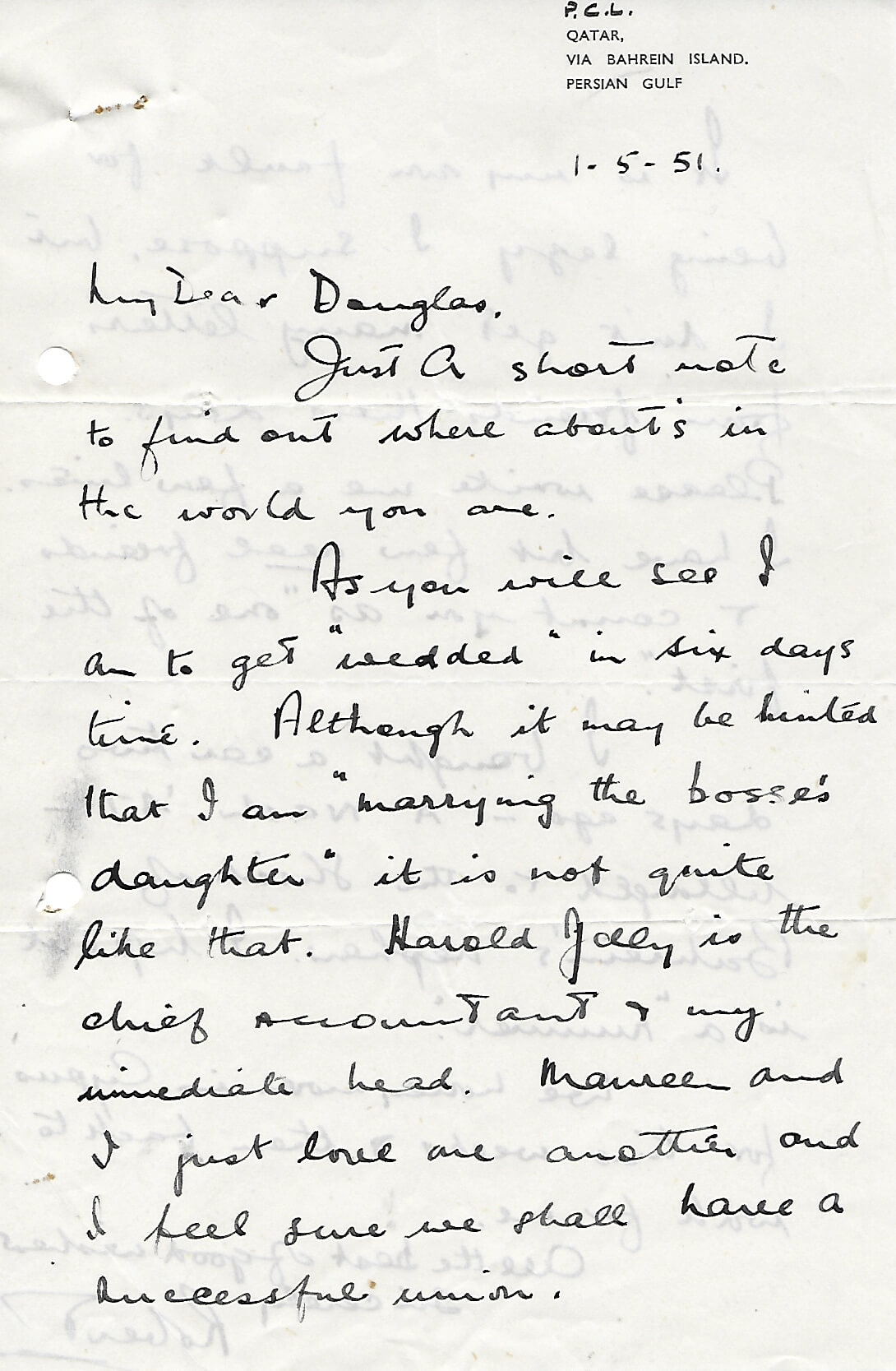 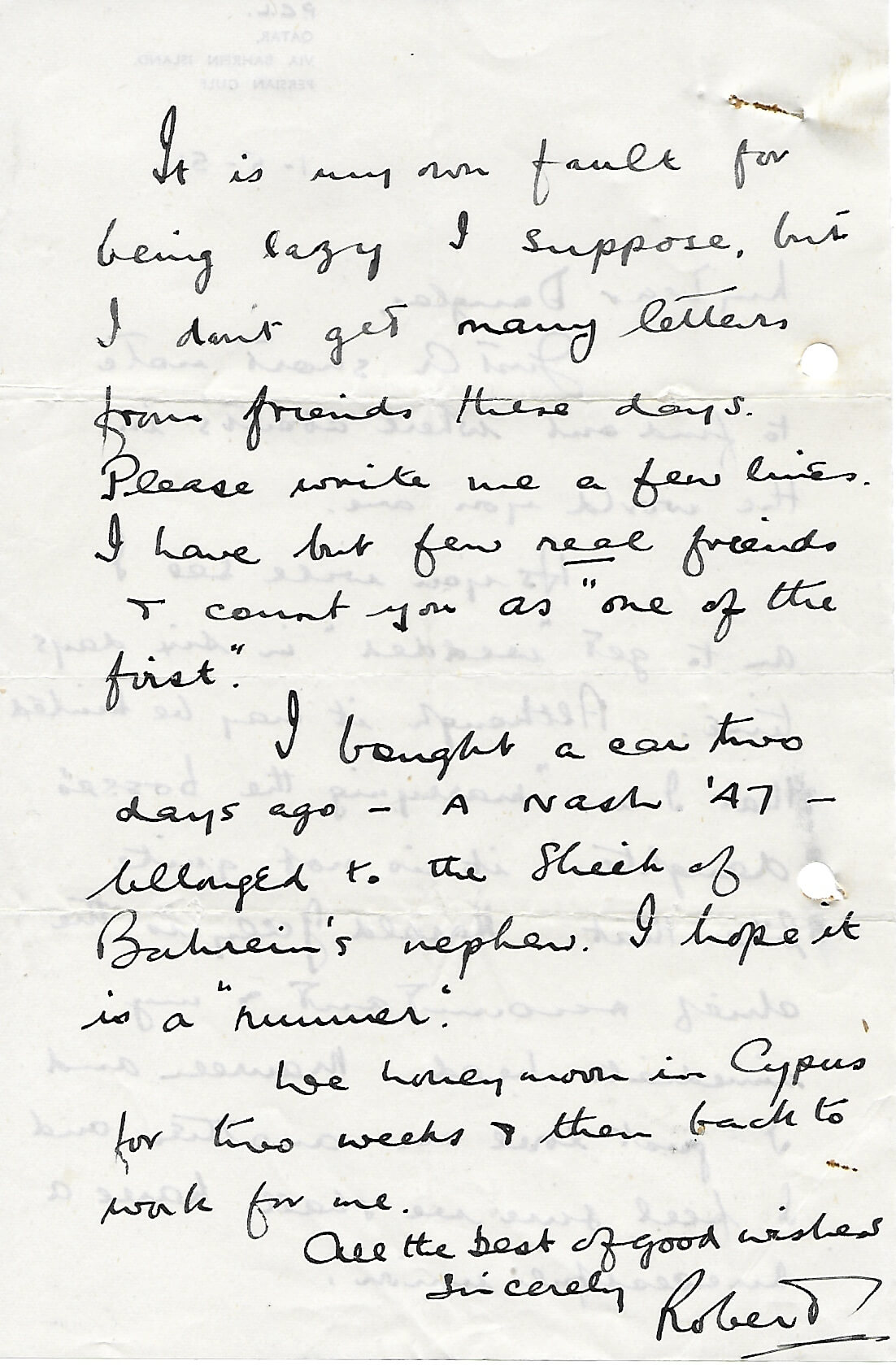 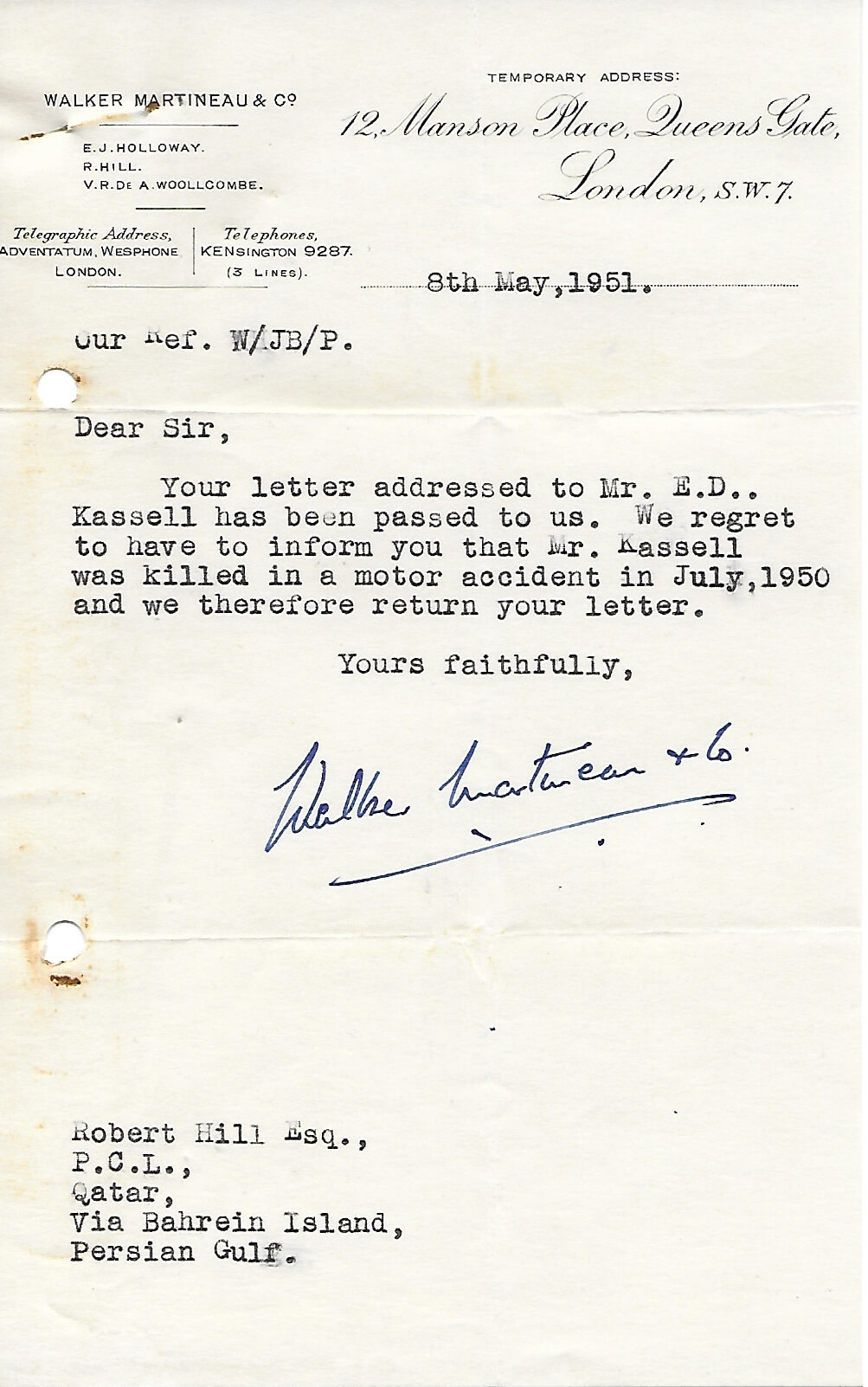