As a young child my small world was built around a square in Mansfield. Not in it but outside it. To walk, or rather toddle around the square was an exercise requiring one to turn left at the front gate of our terrace house, past a row of slightly smaller bay windowed houses with less elegant garden railings into Newcastle Street by Mrs. Turner’s general shop, struggle manfully past a long row of identical small houses, the doors and windows all painted the same dark green. The flat sash windows were draped with spotless white net curtains.

A typical ‘respectable’ street in a small market town in nineteen twenty. At such an early age I was not aware of this image of the street although then registering in my childish brain. My immediate concern was to ward off large dogs with long swishing tails. They sniffed around with their wet black noses. One great big dog with a shaggy shiny golden coat licked my ears and followed me until I reached Mrs. Jones corner shop. She made and sold ice cream. At this point I was supposed to turn back, to turn left at the corner shop was to tread on forbidden territory.

For I had reached Rosemary Street considered by Mother (and big sister) to be a busy road and too dangerous for a toddler. I knew I could reach Marsden’s shop. I could see it on the next corner, which I must confess seemed a long way away. Had I turned right when I came out of the front door and then right again I would have been in Wood Street, at the top of which was Marsden’s shop.

The pavement in Rosemary Street was wide enough. A clanging sound of cans and churns came from the dairy, the hoofs of the dairy horse clattered on the concrete.

On the far side of the road a steam lorry laden with slabs of cattle cake limbered by. It was coughing and wheezing and hissing wisps of white steam; grey smoke belched from a short chimney perched at the front of a barrel of a boiler above two somewhat wobbly front wheels. The wider and heavier rear wheels marked a faint impression on the tar macadam road softened by an August sun. There was no turning back. I had to go on.

Keeping tight onto the garden walls of the houses fronting Rosemary Street, I kept well away from a pair of dray horses pulling a heavy load of barrels. They towered above me, the long hair of their fetlocks swirling around their legs. I decided I liked horses, especially big animals like these. I liked their smell. I grew bolder and followed the dray horses until we reached Marsden’s shop. My little feet then carried me down Wood Street until I reached the small private lane that backed on to Blenheim Terrace.

Four sturdy brick and stone-faced dwellings formed the first of the four houses in the street where we lived. Only the front of the houses were faced in smartly dressed stonework. Large bay windows, heavy stone lintels to the porch doors gave them an air of respectability as did the dwarf stone garden walls supporting ornate forged iron railings.

A large stone with deeply chiselled lettering high in the wall between numbers 3 and 5 bore the legend “Blenheim Terrace 1888”. We lived at number 7.

Once conquered it seemed a challenge to venture further afield. This enterprise was held in check by big sister, who by virtue of being twelve years older had to be obeyed.

Any query or quest for reason why was answered with a:

“Because I told you so”.

Any rebellion several years on brought the retort:

“I’ll tell Mother” and the reply:

The first real friend I had was Hubert Fossey. Bertie and I were in the same class at Rosemary School. He and I and two brothers Sydney and Alan Clark made a regular foursome for a couple of years until I started to make friends with boys who had bicycles, which they had not and we gradually drifted our own different ways.

Looking back it seems strange that many if not all my future friends should be connected with public houses or cinemas. I became friendly with John Freeman because I once went with my father to his father’s pub, demolished long ago to make way for a Marks and Spenser emporium. Both fathers were talking business and John was told to show me the billiards room. It sounded great but turned out to be two large rooms housing two dilapidated full size tables. We could not do much damage because the tables and equipment were beyond further abuse. Needless to say we thought we played some really fancy shots and we were able to play often after school as the billiards rooms were at the back of the premises and never used.

I found an old duplicating tray at the back of my father’s desk that he said I could have. It was next to useless being one of the models that Noah used for inventories of the animals. But with ingenuity and much patience we were able to draw cartoons and print several pages with duplicating ink long past its useful life and revive the clay paste in the tray sufficient to accept the ink impression and make nine readable copies. We published our news sheet for about five weeks and flogged them to our parents and a few old timers in the pub until the novelty wore off or more likely, we ran out of ideas.

Through John Freeman I met Geoffrey Oliver who’s people ran the Queens Hotel in Queens Street. In those days some of the old stables were still in use. The rest we used for play and a right time we had too.

It was by knowing Geoffrey I went on a long day trip to Scarborough. His father was taking a group of “Oddfellows” or some such group that abounded in the twenties. My Mother wasn’t too keen but father who knew all the townspeople said it would be fine for me to go, and so I went. The train journey on the L. N. E. R was long but we children downed so much lemonade that we were a pest wanting to go to the lavatory. 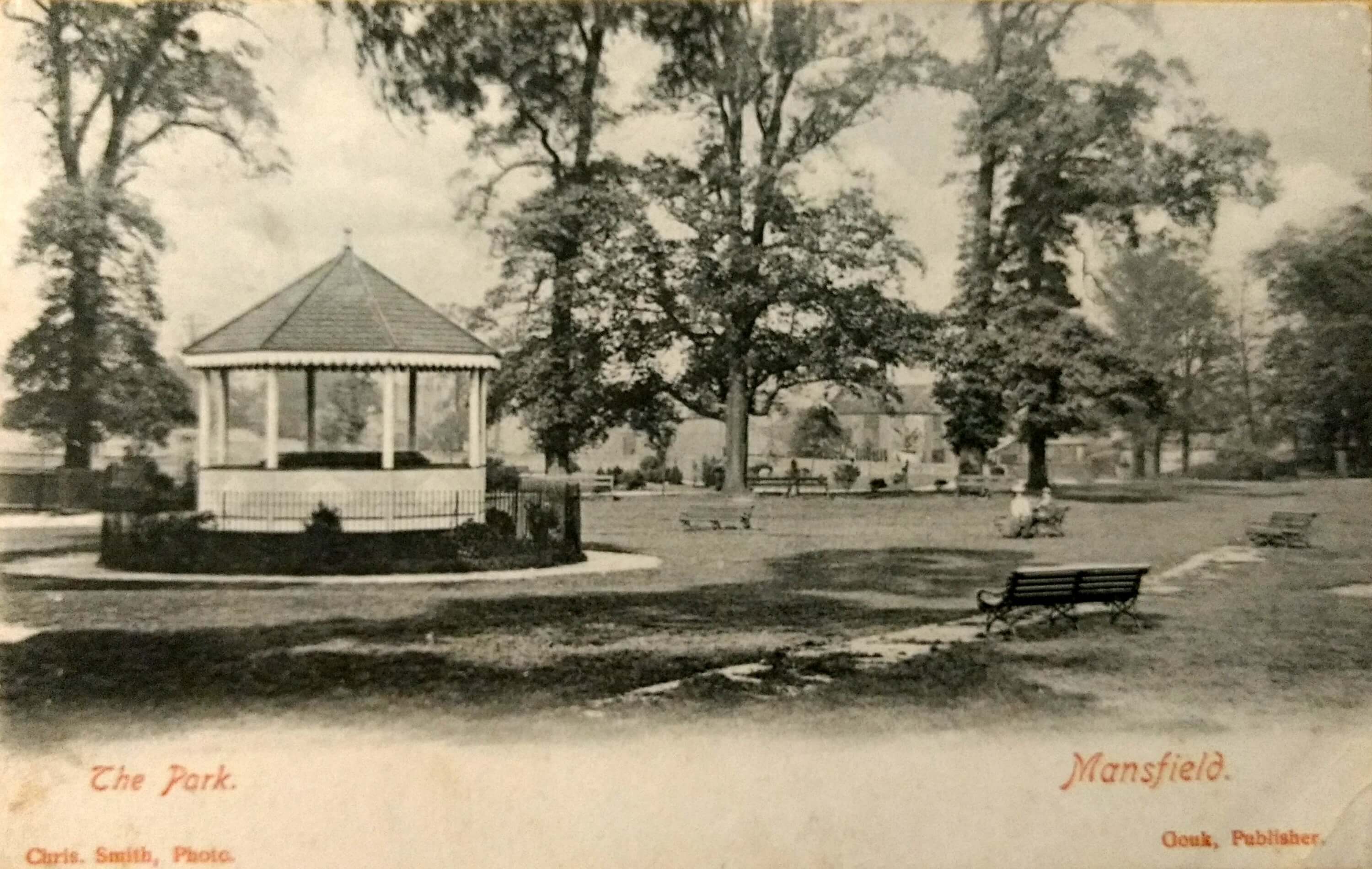 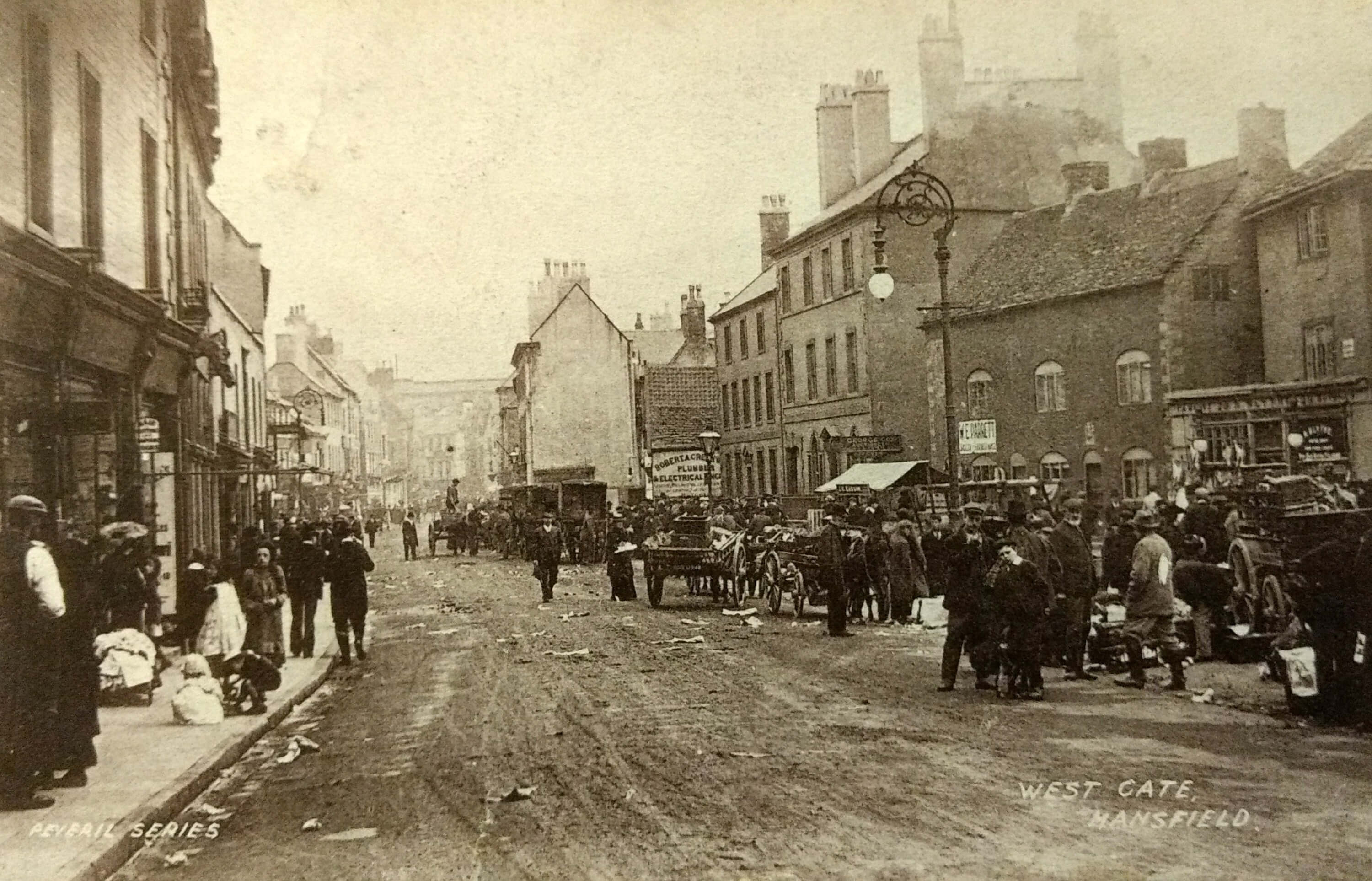 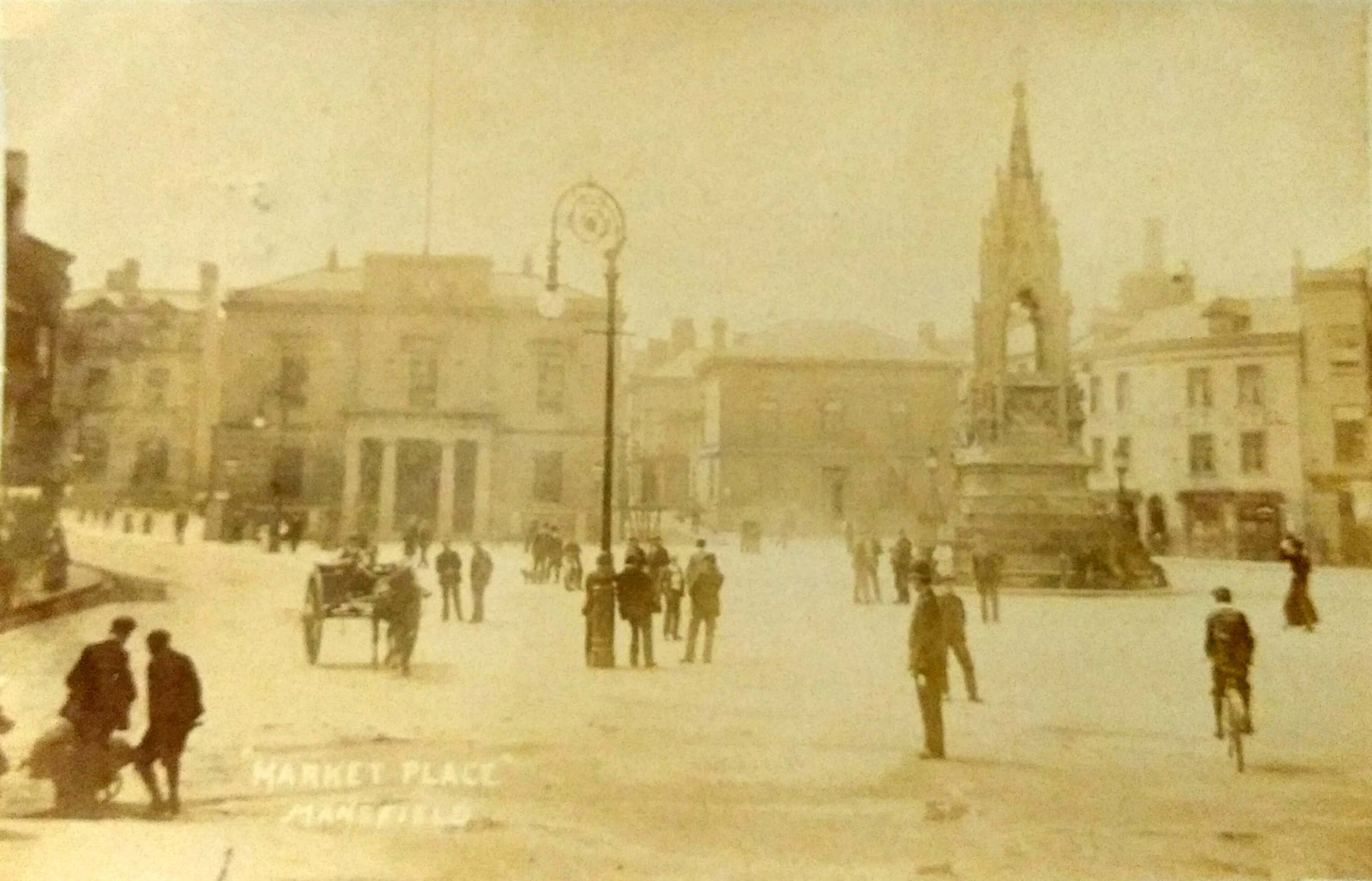 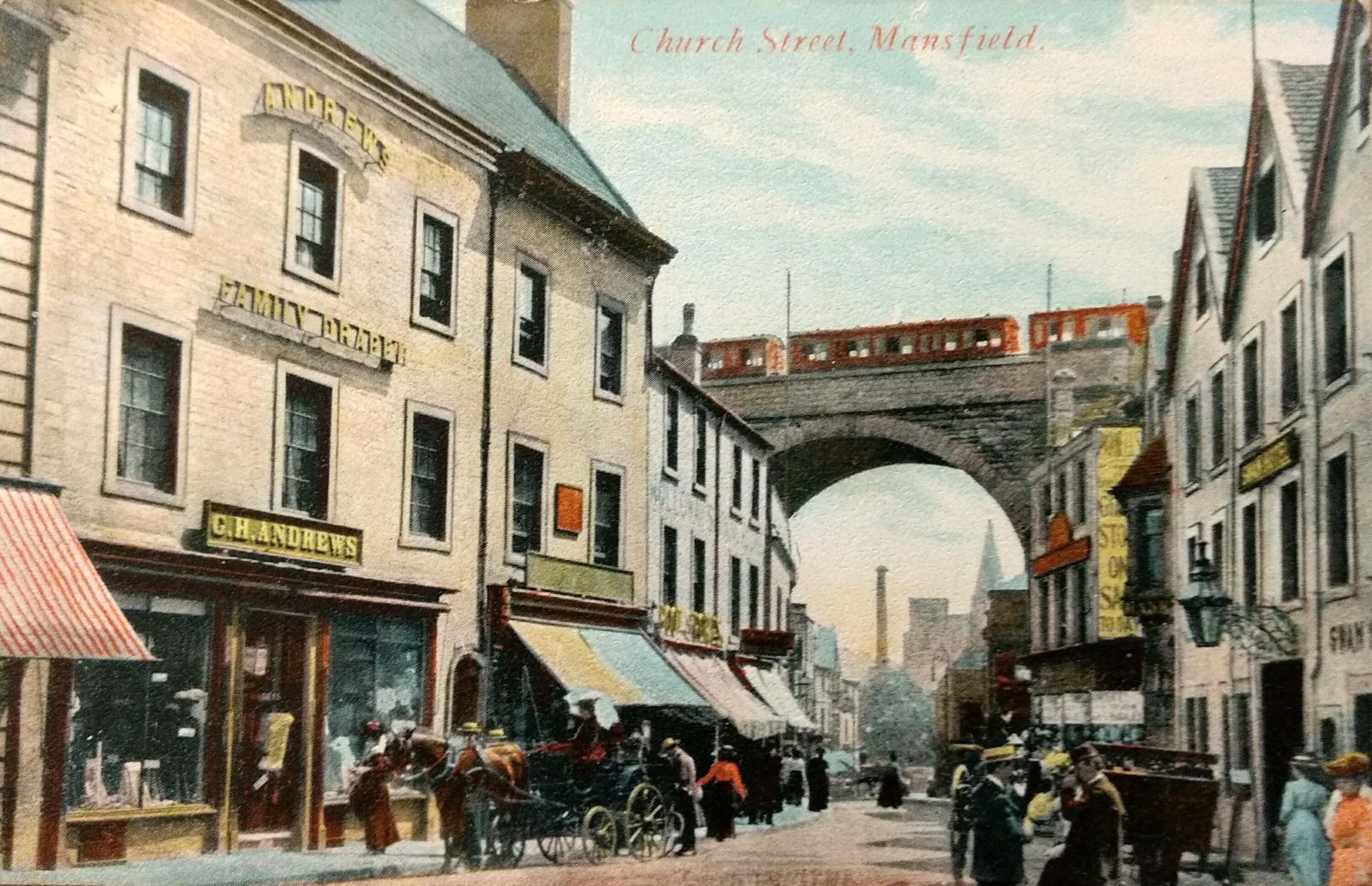 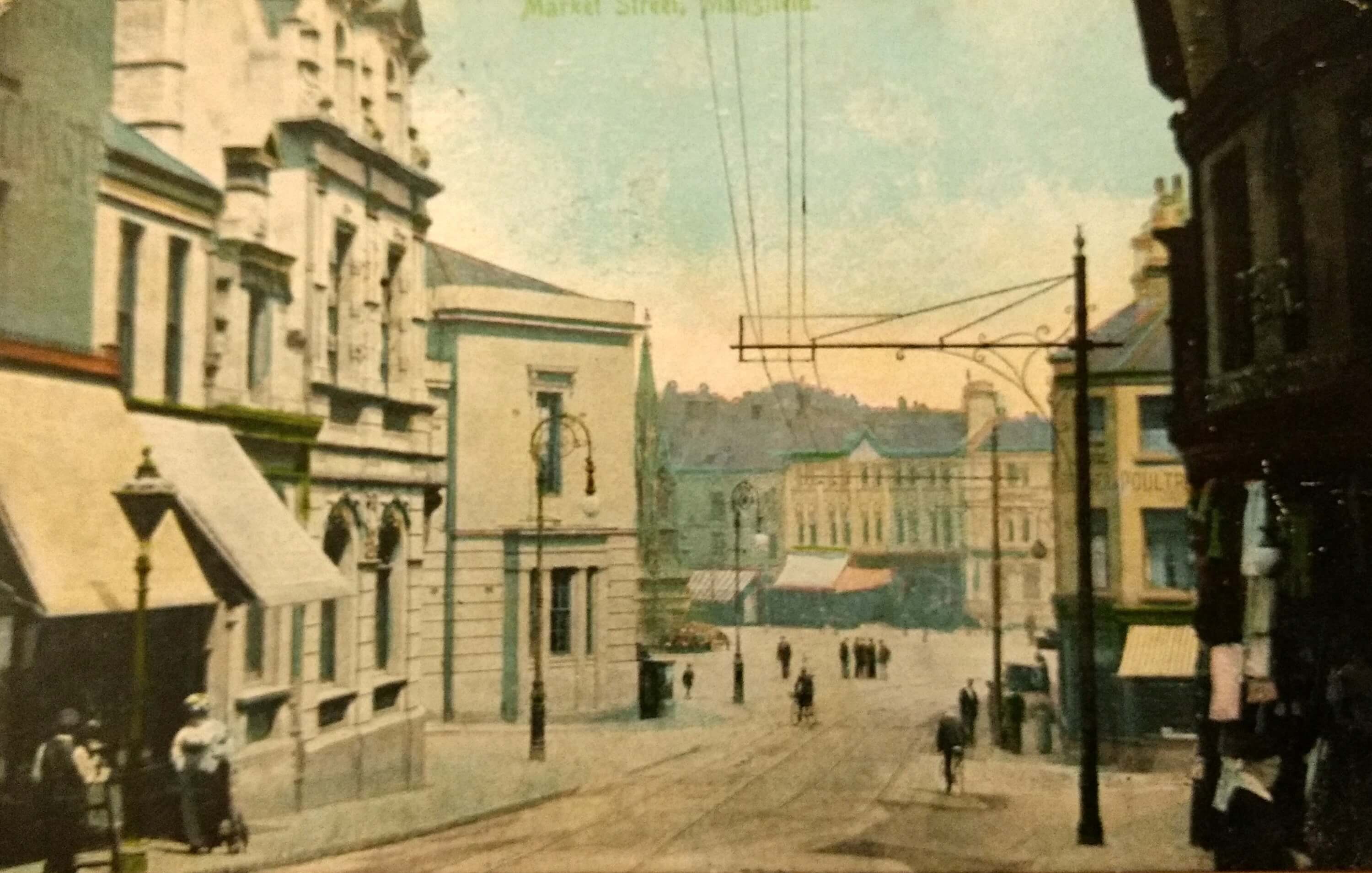 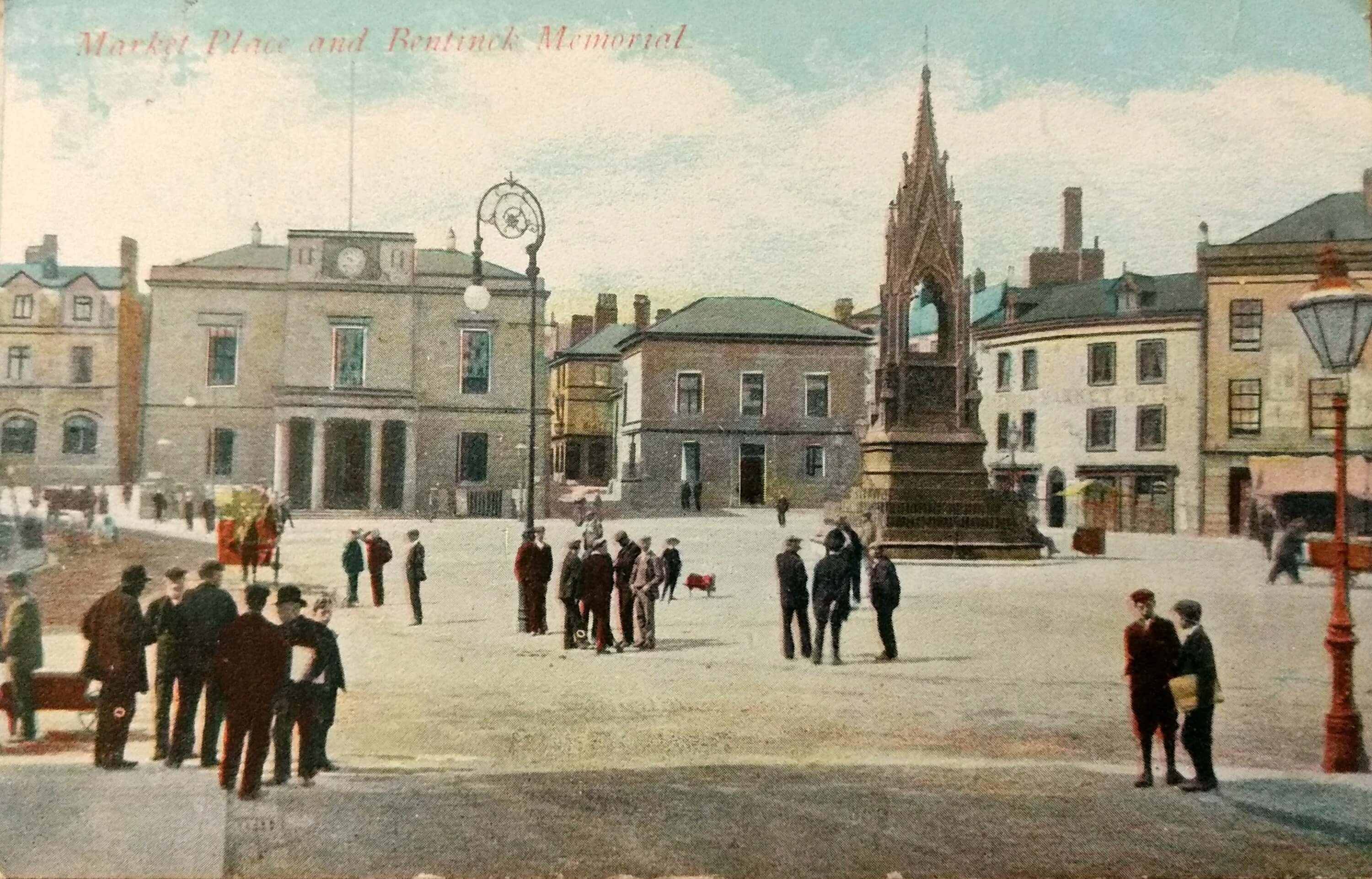 The trip from the station was taken in a horse and carriage, the horse was a fine white cob and the carriage a somewhat rundown open landau yet I felt like a king arriving at the steps of the hotel where we to take lunch.

This was the first time I had taken a meal in a hotel restaurant and the napkins and the silver mesmerised me but did not faze me. Start outside and work in, sometime, somewhere, I must have overheard the rule and so I carried on without more ado. In the afternoon, with a heavy belly Geoffrey and I were taken by Mr. Oliver, each given half a crown and told to amuse ourselves at the fun fair on the north beach. Back to the hotel for high tea. It is alarming the amount of food eleven-year-old boys can eat without throwing up, and back to the station for the journey home, of which I remember very little, I was fast asleep.

Geoffrey’s cousin was a relative of Barbara Vaughan whose father kept the Lounge in Albert Street, a popular public house with rambling premises extending from Albert Street to Dame Flogan Street which lead on to Midworth Street and the Hippodrome. I had an eleven-year-old crush on Barbara ever since we held hands in the Hippodrome cinema. We used to roam the flat leaded roofs of the many extensions to the ‘Lounge’ and hide in the many nooks and crannies. I can’t remember why, or don’t I wish to recall why? But we were banned from the roof being told people had seen us there and we were warned it was dangerous.

Such are the vagaries of human nature. The Lounge is long gone, demolished in the re-hash that the Chief Executive of the progressive Labour Council introduced in the early sixties.

I remember a very pretty avenue and a fine bungalow I had always admired for it had belonged to the Barringer family, wealthy Quakers who owned a large share of the Barringer, Wallis and Manners factory, makers of metal cans, decorated boxes whose factory took up the entire valley east of the town. The bungalow was not for sale in my time.

When I returned to the town some thirty years later I had a long conversation with my bank manager, I was also hiring his sister’s large manse in Leven for a holiday with my family, so we had a great deal to talk about. I had seen a large paddock next to the classical house that Pickard of Pickard’s Jam Factory had built in Norfolk Drive at the back of the Barringer bungalow. I wanted very much to buy the paddock. My bank manager said he would make enquiries. I was willing to pay the asking price – plus. In other words the land was worth, so he guessed, as much as £2,000. I was prepared to pay even more so long as he could get it for me. Being away for more than six months in Arabia, on my return I was astonished and dismayed to find the land sold and a house being built, by, guess whom?