“Well, I suppose that’s one way of doing it!” said my brother-in-law. “Have another go.”

I lay flat on my back, on Black Scotch Lane with the bike on top of me. Thank goodness it had stalled and that the handle bars were so wide they held the weight of the machine from crushing my middle.

I looked around and felt very foolish, and unscrambled myself from the machine. After asking me if I was unhurt he said, “Experience teaches. That’s what happens when you don’t do as instructed. Now remember- let the clutch out SLOWLY.” 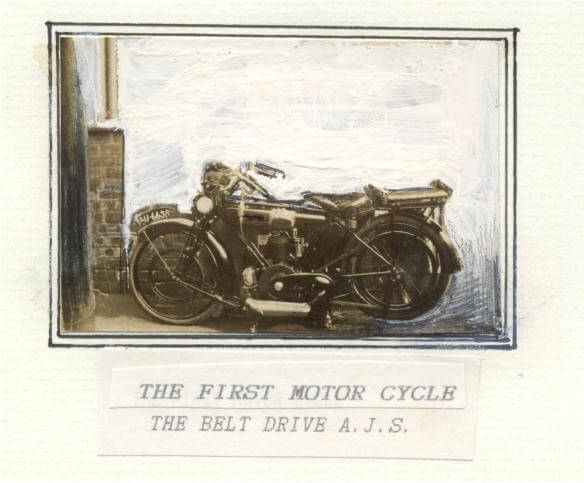 It was my first try at riding a motorcycle. The machine was an A. J. S belt driven 1920 flat tank affair with narrow wheels and tyres the rear wheel having a large rim driven by a ‘V’ belt. In 1933 it was then an old redundant bike – if I could ride it efficiently I could have it as a present. My brother-in-law had driven the motor cycle to a quiet lane, known as Black Scotch lane an unmade country lane surfaced by black slag, hence, so I always understood, the name. Suffice to say it was a quiet empty place – in those days no traffic ever seemed to use it. He dismounted leaving the engine running. I sat astride the machine listening to his instructions. In my eagerness to be away I let in the clutch much too quickly, the rear wheel dug into the road – the front wheel shot up into the air and I was thrown off. No harm done I lifted up the bike and this time listened more carefully and rode off sedately down the lane in style.

This was a magnificent machine. It had twin ports a large splendidly polished chromium tank and looked very like a Brough Superior often being mistaken for one. The bike belonged to John and as he had both a bike and a car it didn’t require much persuasion to convince him that my old Raleigh was on it’s last legs and that I would dearly love to own the big 350 as soon as he thought of getting rid of it.

I had saved sufficient cash to make the purchase. Twelve pounds and that inevitable ten shillings. It was a bargain. It was in good working order and gleamed bright and clean. I was very proud of it. I polished the tank so much I wore off the transfer of the “Griffin” trademark of the Raleigh Company, though truth to tell this was more by design than accident. The trademark showed on the steering damper – a sizeable round plastic covered plate, but that pointed to the sky. The knee grips fastened to each side of the tank also carried the motif but once I was astride that machine they were covered. The two cylinders, the twin port exhausts with highly plated fish tails, the shiny bulbous chromium tank the roar of the engine brought to a crescendo with a quick twist of the twist grip accelerator, a “Brough” for sure. Cheat, but it was fun. After all, the Raleigh Company supplied the makers of the Brough Superior motorcycle with many of the parts used in the assembly, so it was easy to mistake such a beautiful machine for so famous a motorcycle.

I obtained this bike in 1936 and during the summer of 1937 my pal and I went on holiday for a week at Scarborough. On the return journey the engine ran badly. I had run it short of oil, not dry but with too little for such a long run. It was never the same again, gone was the zoom it used to have. I had to think about buying another.

I had to have a new machine. I was now established as a commercial artist, not making a fortune, but earning respectable money. The cost was seventy-eight pounds. I can remember the bike so well it is the only transport for which I can recall the registration number ENN 411

After having a large 350 cc perhaps I expected too much of the Rudge Three months of extensive running about and chasing along Peafield Lane to Edwinstowe racing the Colliery Manager’s son on his Arial “Four Square” at seventy five miles an hour didn’t improve its performance and it had to go back to the Rudge Works in Coventry for a new cylinder I learned to respect it after having been without transport for more than six weeks. It was not a bad bike, but it did give me trouble and I had more fun with the other bikes. I sold it whilst I was in France in the war in 1940 it fetched twenty-five pounds.

Joining up and France >>>