Back in Blighty on return from leave I found I was still in No. 78 R. E. W. S. with Tolhurst in command. Heaton-Armstrong, the C. R. E. was posted and replaced by Lieut. Col. Christian Chevis, very different from his predecessor. H. Q. and the units were being made up to strength. I made friends with new chaps in the drawing office, Larry Wakefield from Lancashire, Leonard Smith-Dobson, a cheerful snub-nosed lance corporal from Jesmondene, Darlington. Alan Glegg another draughtsman all lorded over by a staff sergeant regular who knew so little and a Cornishman, ‘Taala’ Hennah. Bob Fawcett soon to rise in rank.

The new adjutant, a brevet Major had been a senior Warrant Officer as Chief draughtsman at the S. M. E. Foster the Staff Sergeant had been his pupil and liked to let us know. He and Fawcett palled up together.

Fawcett shot to fame as a staff sergeant in no time. I was happy to be alive and enjoyed being in Leeds. I also found a billet with another family, this time on my own where the lady of the house did not bring us tea in bed. But this was not so easy either. I used to return late from the cinema and sometimes had to walk if I missed a tramcar. I slept in the bedroom of the soldier son who, poor lad, was roughing it somewhere in a tent. The daughter stayed up and having made me cocoa expected to be rewarded on the sofa in front of a dwindling fire. This was all very cosy but I became wary when she started hinting and got possessive. I moved yet again. This time to a pleasant Jewish family whose two grown up sons were managers of Marks and Spencer, one at Leeds the other at Sheffield. I used the room of the manager in Sheffield. They were too good to me feeding me smoked salmon for breakfast. 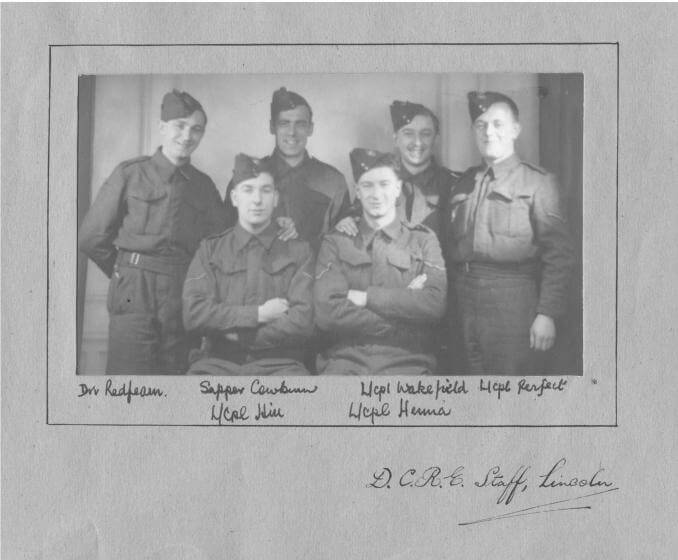 C. R. E. 2 Airfields was allocated to work in North Eastern command. H. Q. stayed in Leeds, 76 and 77 R. E. Works Sections had areas in the north whilst No. 78 R. E. W. S. under Tolhurst made their H. Q. at Lincoln. We took in Lincolnshire and Peterborough. Every one was promoted on the reshuffle. The C. R. E. remained a Lieut. Col. with three deputies, now majors. The title R. E. Works Section became D. C. R. E. Unit (or so we called it) and garrison engineers were now assistants to the D. C. R. Es. Warrant Officers Dixon and Palgrave with No. 78 in France did not return to the unit. Two new W. Os were appointed but they worked out on airfields in the area. Few staff were left at the small office at No. 96 Yarborough Road, Lincoln. Taala Hennah and I were now two stripe full corporals, Wakefield also had two stripes (unpaid) the major’s driver/batman Redfern drove a brand new open Austin 10 the D. C. R. E’s field officer’s staff car, fitted with a soft top and smeared in camouflage paint. One weekend Major Tolhurst went by train to rescue items and secure his house in Wimbledon that had been bomb damaged.

He was also bringing his own car back to Lincoln where his wife and child now lived. Redfern was given four days leave to go to his home in Sheffield. I took a chance and decided to ‘borrow’ the staff car, which was garaged at the back of the Yarborough Road house. With the major in London, Redfern in Sheffield the coast was clear. Making sure the tank was full of petrol I made an early start on the Sunday morning arriving home thirty-five miles away in good time. Having telephoned home from the office before setting out I was expected but not in such fine style. Evading searching questions I enjoyed a good lunch and arrived back by early evening. Eager to get the car back into the garage I pranged a front wing on the garage doorjamb.

A brisk walk to the Regimental Barracks at the top of Yarborough Road and a quiet talk with the quartermaster won me a tin of khaki paint. On returning I went in by the back gate and left the paint in the garage. When the coast was clear I pushed back the small dent with a large stick and using the same stick did a fine bit of camouflage painting with the khaki paint and a bit of black earth. No problem, except to hide the paint. Where? Between the garage and the old brick garden wall. I wonder who ever found it?

Tolhurst came back that evening in his private car stacked with stuff. He stopped outside the office to offload gear he couldn’t fit into his flat. Johnny Hennah and I were helping him; Redfern had not yet reported back, ‘Twist’ was none too pleased. Hennah was moving a small case from the back seat when a shot rang out. I was halfway up the path to the house and Tolhurst rushed past me. I turned and went back, Johnny was white with shock.

A “38” bullet had pierced the lapel of his greatcoat and singed the tip of his nose. The Major looked ashen and apprehensive. Johnny swore quietly yet effectively not sparing the “bloody fool who would be idiot enough to leave a cocked and loaded revolver on the back seat!!!!” Hennah recovered more quickly than the Major who was apologetic and contrite. His nose was not damaged; the shock and smell of the explosion hurt him more than a singed hooter.

Nothing was said to Redfern when he reported late next morning. The paint was dry. I seemed in the clear, yet somehow, Twist got to know of my escapade. I was given a motorcycle and sidecar combination to deliver to our Garrison Engineer at Peterborough and wait there for his instructions. He ‘phoned Captain Chettoe and told him to put me on working out quantities for a couple of weeks. Driving a motorcycle with sidecar attached is quite hairy especially for the first time. I had some idea that one leaned over the sidecar when steering to the right, or is it to the left? – the sidecar being on the left, to keep one’s balance. I soon learned, but eager to push on at speed I had several narrow escapes from “cock-ups” that day.

Back in Lincoln I was free to find a fresh billet. I had previously lived with a delightful family, the master of the house worked for Ruston Bucyrus his wife served splendid meals and the daughter who was my age brought me tea to bed. She too became so possessive she tore up my sister’s photograph recently sent to me. The trip to Peterborough had been a good excuse for the change.

Time to move on. After the New Year we returned to Leeds. We spent time bringing the strength up to date, completing the G. 1098 stores, being issued with personal kit and mosquito nets and topees which where withdrawn and placed back in the G. 1098. We made the most of our days and nights. Pubs cinemas, the music hall, seeing girls home from dances, a nice family billet a steady time at Headquarters, and plenty of time to explore Leeds.

Teddy Perfect and I teamed up together as going out pals. We scoured the middle of Leeds for places to go. We haunted the City Varieties music hall because it was colourful, cheap and had a bar in which we (or at least I) felt sophisticated and comfortable. The entrance was up a little side cul-de-sac. Our other main attraction was Whitelocks City Luncheon Bar a very posh and well patronised place where one rubbed shoulders with city gentlemen, reporters, officers with plenty of pips on their shoulders and a few of us other ranks for it was a cosmopolitan set-up e’en though appearing so much of the ‘establishment’ environment. The food was excellent and the atmosphere so wonderful to we young soldiers. Being stationed in Roundhay Park and now billeted just close by in Chapel Town it was easy to jump on a tramcar and be carried in a dozy, drowsy, semi drunken state to bed. We were not heavy drinkers and anything over a pint could be relied upon to make us appear tipsy. We lead a happy and carefree life. I knew that at one billet I stayed at I could be almost certain of a fumble and tumble even if not always the real thing – however un-lovely-with the smelly girl of the family with whom I lived. I must have been smelly too for there was seldom any hot water, not enough for good bath. That is how I learnt to wash down in the bath (there was no shower equipment) using a shallow bowl.

The first billet I had was with a very up-market family beautiful house evidently well off.

Within two weeks we were sent on home leave for a few days. On return that billet was in use by an officer so we had to split up and I went to a Jewish family. Mother and father and two sons. One was at the Marks and Spencer emporium in Leeds and the younger was a manager at the Sheffield Marks and Sparks. I used his bedroom. They were delightful people – gave me smoked salmon for breakfast. I again had a week end leave to home and when I came back on the Sunday evening I brought my attaché case. When I returned on the Monday evening the whole house was ablaze with candles. Dozens of them all over the house.

I asked the son was a festival was being celebrated. He looked solemn and then smiled a broad smile “Well I’ll tell you, I hope you will not be offended. My Mother found some ham sandwiches in your bedside drawer. Perhaps you don’t know our habits but to bring “PIG” into the house is pollution. I’m sorry your obviously didn’t know but that is why all the candles are out to rid the house of the pollution. We are orthodox Jews you see. I could not apologise enough and said I would apologise to his parents. He asked me not to do so – just let it go and when I insisted so he said he would pass on my apologies.

After sometime – several weeks I moved again into a new billet this time with an English family. Very Yorkshire working class people. The place was such a difference from my other billets. I had the bedroom attic at the top of the house where the eldest son had slept. Poor lad he was in a tent somewhere in the U.K. I had his bed. Not that it was great pickings. It was a hard mattress single bed in a cold draughty attic with old worn blankets as bed covers. But there were other extras.

The young unmarried daughter who lived at home and helped her ma used to wait up for me and let me in when I came home late from my wanderings in Leeds city. She would make me a mug of hot sweet cocoa and then snuggle down with me on the sagging sofa in front of a dying coal fire and try to get me interested in making love. Some nights I felt like it, some I didn’t. When I did it was fun although a somewhat sweaty performance for she was a hefty lass and needed a bath, but then I suppose, so did I. I was happy.

Then the unit was put on alert for overseas.