Marriage, another development. A few months after returning to the desert I met and married the woman of my life. We were married in the Embassy in Bahrain and flew off to Beirut and Cyprus for our honeymoon. In Beirut we were taken everywhere in huge American limousines and lived in the luxury of the St. George Hotel. 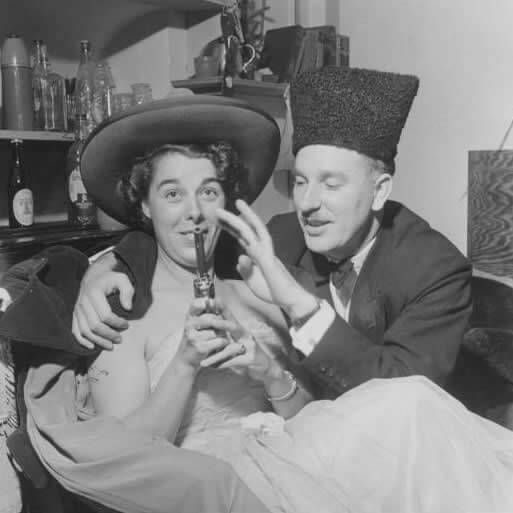 This was not a problem when I had to take my driving test. Oh yes, I had to take a test. Mr. Popodopoulis our company agent in Cyprus, arranged for me to go to a little Police Station two miles out of town. A police sergeant got into the Vauxhall and instructed me to drive down the road for about three hundred yards and then turn down a narrow track. He asked me to reverse out on to the country road. This of course I did with ease. I then waited for the next instruction that was “Good, that’s all” – and they gave me a licence to drive in Cyprus for three months, at a cost, if I remember correctly of five shillings.The second week we flew on to Limassol in Cyprus. We rented a car, a Vauxhall Wyvern Saloon. A neat looking car but they warned me when renting it I may have trouble with the third gear. I did, it didn’t work at all.

Driving around the Troodos mountains was very good practice for twisting roads and hairpin bends. On one occasion when visiting a monastic church perched at the top of a mountain I had to obey a sign – in English which required the driver of a vehicle proceeding up the hill to use the field telephone in a box by the sign, and enquire if it was in order to drive up. Should any vehicle be coming down there would be no chance of passing as the road was so narrow. It was so narrow we almost didn’t go. We were glad we did. The little church at the top was dark and dusty and illuminated by three enormous chandeliers. So large in fact a tall person could almost brush his head on the lower-most crystal pendant. The old monk was eager to show us the treasures of the church which turned out to be some rare icons and ornate silver gilt ornaments. The light from the few bulbs in the chandeliers was so dim we had difficulty in seeing anything inside the place. It seemed capricious to have three huge chandeliers that literally filled the church and were completely out of proportion and then use tiny bulbs for illumination. 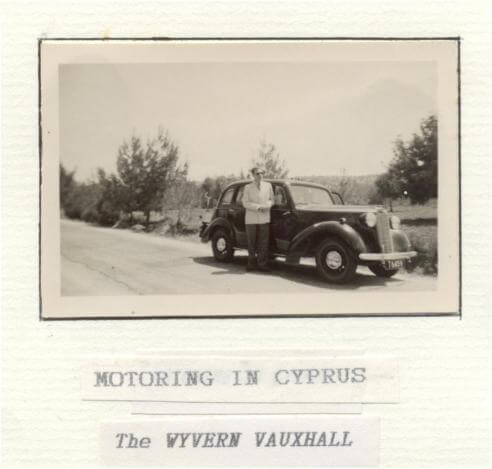 It was not long after our return to Qatar that the conditions began to change. With the influx of more management personnel and the evolvement of company structure it was inevitable the days of “laissez-faire” which existed immediately after the war would come to an end. With the exception of top management all vehicles had to be returned to the yard after working hours. But to get back to the hired Vauxhall Wyvern saloon, the fact that the third gear would not engage with any certainty called for added skill in gear changing and lent spice to my driving. It was a sturdy car and gave us great joy on our tour of almost all the island. I was later to meet up with its cousin in Lebanon, but next time I would be the owner.

The Nash was ancient when I bought it. But the need for transport was urgent now that we could not have free access to our cars after working hours. I had to get a car, and beggars can’t be choosers. Newly married, the prospect of a baby, a not in-expensive honeymoon even a well-paid junior executive had to watch the pennies at that point. As my duties took me to Bahrain once each month I made contacts through my office. 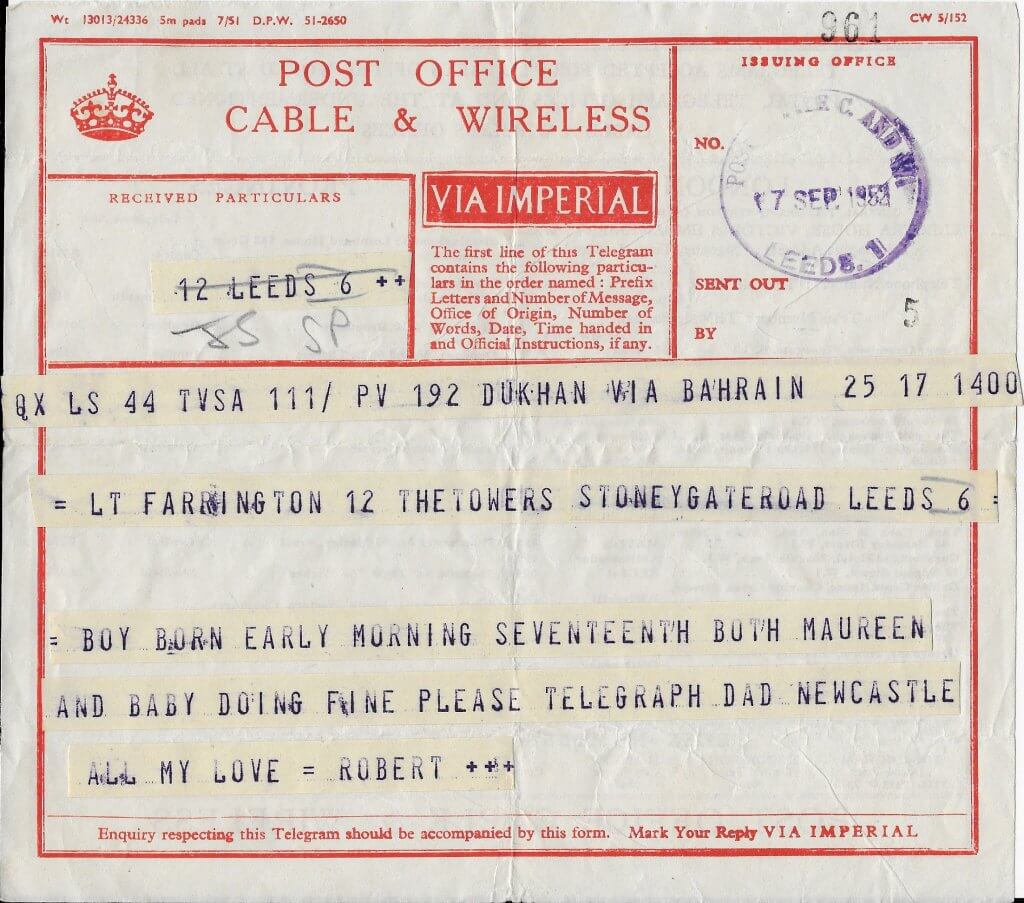 The haggling that went on for two months finally left me the owner of this huge hulking American monster of a machine that had served in the twilight of it’s life as a taxi. 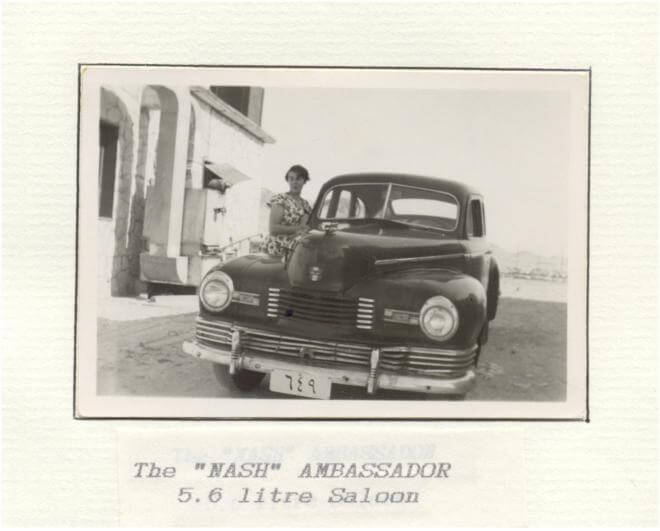 In those days we had an arrangement for work to be done in the company workshops for the cost only of labour and materials. I had a paint job done after a new cloth ceiling had been fixed and the seats re-upholstered. It looked great. In the American and the English sense.I made arrangements with our shipping section to bring it over on one of the hired dhows we used. Now, as these transactions had been going on for two months it was common knowledge what I was doing and the hire and fire local employment wallah also negotiated a car from someone in Bahrain. I had special radiotelephone contact with my accounts clerks in Bahrain so I made sure my car was on the dhow. When the boat arrived at the Zekrit jetty my car, having been put on board first, was still aboard when the car belonging to the employment chappy was being swung ashore. He had the gall to say, “Thanks for fixing the boat, now I’ve got the first private car in this peninsular”, and drove away.

My wife mastered driving so large a car and it was on one of her trips to the beach a year later that she had an experience that almost undermined her driving confidence. In the car with her was our baby son and her sister who was staying with us. The beach was three miles from the camp. On reaching the junction of the beach road and the main camp road the car hit a deep pothole. The nearside front suspension arm snapped – severed in twain. The front of the car slithered to the ground collapsed on to the flattened wheel and tyre. No one was hurt; thank goodness the car was being driven slowly. The mechanical workshops came to the rescue and fixed the suspension arm and the car ran as before.

I now had my eye on the Hillman Minx, the car belonging to the manager of the construction company. Verag Nercessian an Armenian and his wife had become good social friends. He told me he had a new car on order. Of course I would buy the Minx, first I had to sell the Nash. This was easy. At the bar of the Club one evening I announced to everyone – we are off on leave soon, any body want to buy my car? I had three offers. Two facetious and one from a civil engineer, an Englishman newly arrived from Lebanon. I sold it to him just before we left and made a firm arrangement to buy the Hillman Minx upon our return.

I was later to learn the engineer had the workshops strip down the engine, re-build it, repaint the body and generally re-furbish the car until it looked like new. How much it cost him, how much he got done on the “old boy” routine I couldn’t tell you, for I never bothered to find out. But I didn’t lose on the deal; he paid me as much as the car had originally cost me plus the shipping, the re-upholstering and repairs.

Before going on leave I telephoned to England to speak with Frank my friend and owner of the small cinema chain to ask if his brother-in-law who dealt in cars could find me a good one second hand. In those days Qatar had no telephone service link with the outside world. One had to go to Bahrain and speak from the Cable and Wireless office in Manama. It was also necessary to book a call one day ahead.

Cable and Wireless had a special room reserved for such overseas calls where one waited until the operator made a connection with the required party at the other end. Each call was limited to three minutes and it was timed from the second the two parties started speaking. There was much discipline observed in those days.

I was due to make my call any minute when in rushed a fellow whom I recognised as Freddie Bosworth. He had been in Bahrain for several years having first started to give flying lessons using a tiny aircraft. From such fragile beginnings he had bought a clapped out Avro Anson Aircraft and ferried all manner of odd cargo up and down the Arabian Gulf. He asked me if he could jump the queue and take my turn. I asked if it was all that urgent and when he told me that his aircraft had caught fire and gone up in smoke my reaction was immediate. “Of course” I replied. And then I thought “What the hell! If his plane is on fire he should be ‘phoning the local fire brigade or the airfield! Caught by the word ‘fire’ and his urgency I had not thought the thing through but it was too late, he had already told the operator at the counter and gone ahead of me. Which is why I listened to his call. He was yelling down the phone apparently to his lawyer or insurance broker in London giving details of the plane and requesting action on a settlement. He had to buy another plane to stay in business. It would appear he did so. For a few years later he was in a Dove aircraft, said to for sale by The Aga Khan and whilst flying over Weybridge the plane ditched and the four aboard were killed. At that point in time he had formed a company called Gulf Aviation and his widow later sold out to B. O. A. C. for, I am told, around fourteen thousand pounds. Strange beginnings for Gulf Airways. 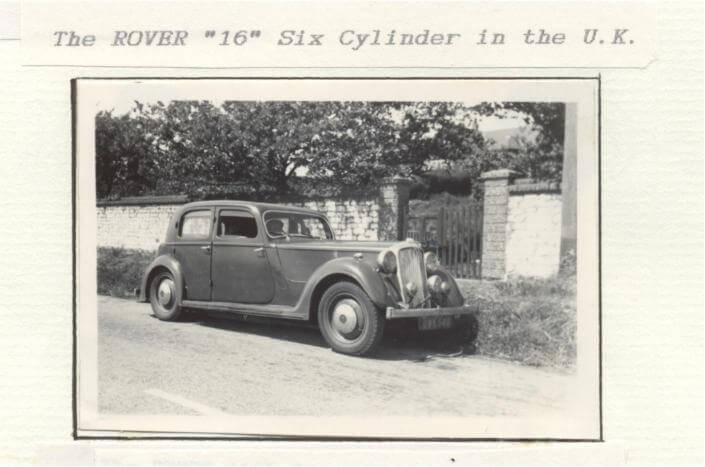 I drove alone in the Rover back to Nottingham and sorted out the garage man. At first he played tough. He wouldn’t buy it back from me. In the end I threatened to take it to the A. A. and told him I had evidence from the A. A. man. He bought it back; I lost one seventy pounds. But I had used it for five weeks.At last I got through to Frank. He promised to do what he could to find a car. He came up with the choice of several, with a small garage in Nottingham. I bought the Rover, it was clean, had reasonable brakes, but was sluggish. No matter, we were not chasing all around the country at speed. We did however make several journeys to my in-laws at Flamborough and it was on such a journey whilst riding over a bumpy level crossing near Market Weighton the steering went wild and we ended up in a hedge bottom. The steering arm had severed from the wheel drum. It had been badly bolted on to the drum with a mild steel outsize washer. A botched dangerous repair. It was fortunate for us the car was travelling at slow speed. An A. A. motorcyclist rode up within ten minutes, thanks to the signalman alerting them by phone. He did another patch job, and driving frightfully slowly we reached Taunggyi Ooyin at Flamborough many hours late.

London to Baghdad by car >>>