Home »The war in 1939 »Military transport

In the early days of the war in 1939 my time spent at the School of Military Engineering at Chatham did not include driving mechanical military transport, using it, yes, whenever I could to relieve the incessant marching and walking when we were not in class. The first time I was able to ride again was in France in March 1940. Our tiny works section, a Garrison Engineering Unit was allocated a Matchless motorbike. Of course at each opportunity yours truly volunteered for any errand. One day Captain Tolhurst suggested I go for a spin into Troyes some forty kilometres away to take and collect the mail and also buy him various items in the town. ‘Twist’, for we called him that when he was not present, seldom, if ever gave a direct order, when he did it was apologetic in tone, went on to remind me not to stay too long in Troyes for everyone was looking forward to their mail.

Having had a good lunch and a chat with the chaps at the headquarters the smell of the countryside and the open road seduced me to head the bike in a wide detour back to Anglure. To shorten a long story suffice to say I found myself miles in the wrong direction and when I was stopped by a military police truck they said in no uncertain terms, “You’re bloody miles away from Anglure – its way back over there”, – pointing wildly in a westerly direction. The Matchless machines were good workhorses; I rode several of them many long miles in the Western Desert.

Back in England, after escaping from France on 17th June, the day before Vichy was declared by Petain, with now, thank God, no vivid nightmares of the sinking Lancastria, we reformed as a group in Leeds and I found myself stationed at Lincoln, still with C. R. E. 2 Airfields and still with Captain Tolhurst’s unit. He now promoted Major, me still a corporal. I was only forty miles from my home. ‘Twist’ the new D. C. R. E. had gone to London by train to rescue items from his house in Wimbledon. Now was my chance to borrow the almost newly allocated Austin “run-about”. A field officer’s staff car, a tiny Austin 8 smeared in camouflage paint and fitted with a soft top. The car was kept in the garage of the house we used as a headquarters, No. 96 Yarborough Road overlooking the racecourse. Making sure it had a full tank the night before I made an early start on the Sunday morning and arrived home in time for lunch. 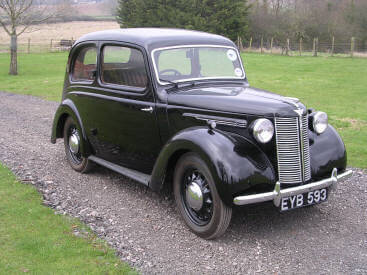 The Major did find out. He said nothing at the time but I found myself delivering a motorcycle combination down to the Peterborough Garrison Engineer’s office and to wait for instructions. He had phoned his G. E. and told him to put me to work on quantities (which I hated), and keep me there for ten days. Driving a motorcycle with sidecar attached is quite hairy especially for the first time. I had some idea that one leaned over the sidecar when steering to the right – the sidecar being on the left – however I soon learned. Always eager to push on at speed I had several narrow escapes from “cock – ups ” that day!I had telephoned to home from the office before I set out, so they were expecting me but not in such fine style. However I evaded searching questions. I was in Lincoln by early evening and eager to get the car back in the garage I pranged the front wing on the garage doorjamb. Up early on Monday morning I drove the car to the barracks at the top of Yarborough Road, saw the “Q” there, begged some paint and with a bit of stick pushed back the dent in the mudguard and using the same stick slapped paint on the bruised area. No problem.