My longest, and perhaps loneliest ride was in 1941 in the Western Desert when I acted as a dispatch rider. The works section was camped between Mechele and Msus. Tolhurst, the D. C. R. E. sent me with a dispatch to the Chief Engineer Advanced Air Striking Force, Brigadier Kisch, said to be stationed at or near Benghazi. It was the first “push”, the first time the Eighth Army had captured thousands of Italians and had the German Army on the run. It appeared Twist wanted to know what the hell to do next, we were sat in the desert without any orders. Off I set on one of the Two Company Matchless 350s. Wearing greatcoat, peaked hat, with leather revolver holster packing a spare company 38 with only six bullets, my rifle slung over my back with ten rounds in my pocket and a few biscuits and a tin of bully. Thus clad and mounted, I checked again the letter in my inside pocket and rode away into the desert in the general direction of Derna. 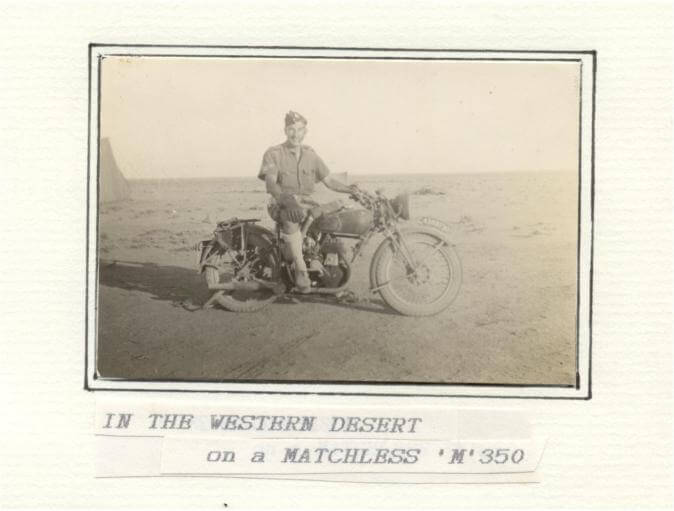 The machine behaved well. Towards evening, near Matuba, I stopped at the camp of a squad of Indian Sappers of 4th Ind. Div. They were delighted to feed me and seemed reluctant to wave me on my way. Next day in the late afternoon I rode into Derna to be greeted by air raid sirens I sat astride the bike in a once splendid tree lined avenue with large apartment buildings looking out on to a park.

A voice yelled from a second story window: “There’s a shelter in the park just behind you”. When I found it I wished I hadn’t. The previous occupants had used it as a latrine. It was quite late when I eventually found the H.Q. and delivered my ‘despatch’.

That night, trying to sleep on a borrowed blanket on the floor of the sergeants’ mess I thought of the journey that day. Of the utter loneliness of the situation, miles away on my own, on a motorbike in the Western Desert with Gerry and the Eyrie’s a few miles over the horizon. What would I have done had I come across a pocket of them left behind? Would they have surrendered to me or shot me out of hand to keep their position secret? With these thoughts in mind I dozed off.

The next morning the staff officer informed me that there would be no reply for me to take back. I was to follow the Brigadier’s staff car – they were going over to see the D. C. R. E. Off we went. At first all went well, except I kept a respectable distance behind so as not to suffocate in the fine dust thrown up by the car. Miles later we reached an outcrop of rock, huge wedged shaped slabs angled one into the other to form a formidable surface of angled steps stretching on either side as far as the eye could see. The huge balloon tyres on the staff car allowed it to bounce slowly over the obstacle course. The Matchless bucked and bounced until it sat down on the edge of one great slab of rock from which position I had to wrestle it. This went on more times than I care to remember.

I sat there temporarily exhausted, watching the car drive off. I had just cleared the causeway when the staff car turned back and on reaching me Major White the S. O. yelled: “Having trouble?” “Just a little, Sir, – had to pull the bike across that lot.” “O.K. just follow on as fast as you can, we must get on” and they drove away like greased lightning.

I didn’t like his tone, I didn’t really know why, so I muttered to my self, ” I’ll bet YOUR arse isn’t sore and YOUR balls don’t ache!! “

A few miles further on we met the section truck returning with water barrels. It was arranged to put the bike on the truck. I got up to steady it. A mile or so later the truck struck a bad patch and one of the water barrels rose in the air and came crashing down on my toe. Alas I was wearing forbidden desert boots, we all did, but they didn’t help save my toenail. I had a crushed toe for weeks after.

I had several more brushes with 8th Army transport. Once driving a three tonner belonging to the R. A. S. C. unit allocated to us for ration purposes I persuaded the driver to let me have a go. Always eager to put my foot down I got her underway and made the stupid mistake of steering across deeply rutted tracks in very deep sand near the beach at Sidi Barrani where we had a tiny camp. Going full pelt across such a hazard nearly upset us. We bounced so high in the air I lost control of the wheel the rations in the back were thrown out and the R. A. S. C. driver threatened to do the same to me. It was his truck and he made a meal of inspecting it, damn near every nut and bolt until I felt knee high to a worm.

In 1942 we were pulled out of the desert and the whole C. R. E. 2 Airfields organisation was posted to PAIFORCE in Persia. Before going the Adjutant managed to wangle a “buckshee” three ton truck and rather than allow the Brigadier to see it in the line up ready for the farewell salute Sergeant Foster and two others were detailed to drive out five miles on the canal road and wait for the convoy. Foster was known to the Brigadier and he actually asked where Foster was! Hurried excuses where made and the Brigadier was not fooled so easily, he sent his condolences and hoped he would soon be out of hospital!

Packed on the truck under tarpaulins were three motorbikes, yes you’ve guessed it, the three Matchless machines from 76, 77 and 78 Units.

As soon as we got across the canal we reached the new “ribbon ” road recently constructed. I volunteered to ride one of the bikes all the way to Haifa. A thoroughly happy carefree ride. We had instruction not to halt on the road, as it was possible the weight of the heavy vehicles could punch through the very thin layer of bitumen mix laid as a carpet over deep sand. The next several days I had painful sores from sun blisters as large as half-crowns on the top centre of each thigh, which were not covered by my shorts.

After we left Haifa to wend our way across the lava desert into the Holy Land the bikes found their way on to the back of each section truck. The next slice of drama was the crossing of the old bridge across the Euphrates. I found myself in the cab of “waltzing matilda”

Transport was scarce in Persia; the three motorbikes were taken over by the officers as their trucks had been withdrawn. We walked in our spare time or used horse drawn “droshkies” to get us back to the billet at night.

By the time we moved in convoy down to Bushire and Ahvaz to enship for India I had learned not to volunteer my driving skills and travelled in comfort by the side of a driver in a solid three tonner.

We travelled across the Sind desert by train, a glorious journey that took ten days, and camped in commandeered rail coaches in Sialdah station at Calcutta eventually reaching Tripura, an enclave state in Bengal and set up shop. I had access to plenty of transport. Third line jeeps and clapped out A. J. S motorbikes were available all the time but there was no place to go. The only hairy experience I had was driving back to Agatarla one evening from the R. A. F. mess on the airfield I was coasting along driving by the light of a cloud shrouded moon – the headlights of the Jeep were covered in tin plates with a letter box hole cut in them – when suddenly I sensed something strange ahead. I rolled to a stop; thank God I did; I was drunk on Pabst beer and a few gins but not too cut to realise I had missed driving into ten feet of nothing. The heavy monsoon rains had swirled down a wadi and washed away forty feet of road.